CYSO alum Anthony McGill—principal clarinet of New York Philharmonic and recent recipient of the prestigious Avery Fisher prize—will lead our October virtual masterclass. Anthony will work with three of our young clarinetists and answer questions from the CYSO community. 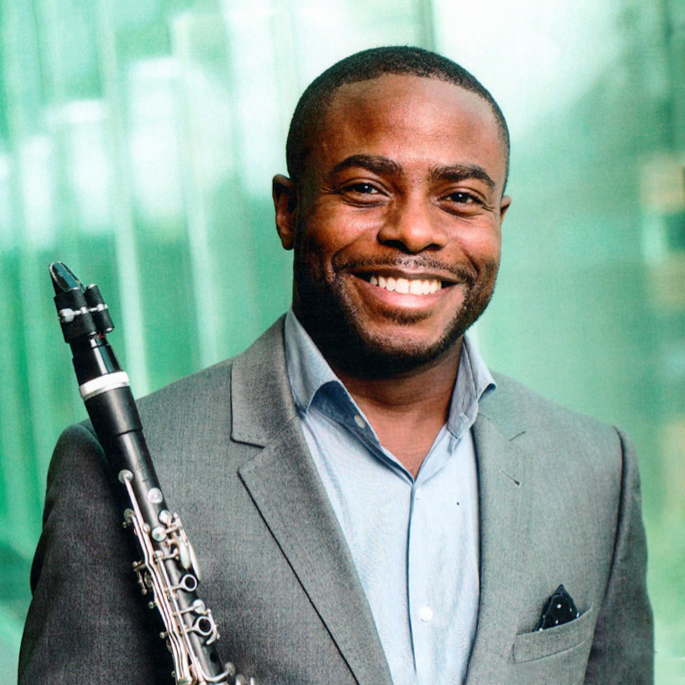 Hailed for his “trademark brilliance, penetrating sound and rich character” (New York Times), clarinetist Anthony McGill is one of classical music’s most recognizable and brilliantly multifaceted figures. In addition to his dynamic international solo and chamber music career, McGill is principal clarinet of the New York Philharmonic—the first African-American principal player in the organization’s history. In 2020, he was awarded the Avery Fisher Prize, one of classical music’s most significant awards given in recognition of soloists who represent the highest level of musical excellence.

McGill was honored to take part in the inauguration of President Barack Obama, premiering a piece written for the occasion by John Williams and performing alongside violinist Itzhak Perlman, cellist Yo-Yo Ma, and pianist Gabriela Montero. He is a dedicated champion of new music: during the 2020/21 season, McGill performs “Peace,” by Jessie Montgomery; “Ad Anah?” by James Lee III; a new work from Benjamin J. Shirley; “Book of Days,” by Daron Hagen; and “From The Mountaintop,” written for McGill by Richard Danielpour.

In the aftermath of the killing of George Floyd on May 25, 2020, McGill launched a powerful musical protest video urging people to #TakeTwoKnees in demonstration against the death of George Floyd and historic racial injustice. His video went viral, and hundreds of artists and citizens amplified the message and responded to the protest with their own videos using the hashtag #TakeTwoKnees.

In demand as a teacher, he serves on the faculty of The Juilliard School, Curtis Institute of Music, and Bard College Conservatory of Music. In the fall of 2020, he was named Artist-in-Residence at the Cali School of Music at Montclair State University.

In 2015, McGill recorded the Nielsen Clarinet Concerto together with Alan Gilbert and the New York Philharmonic. He and his brother, Demarre McGill, the Seattle Symphony Orchestra’s principal flutist, joined the Chicago Youth Symphony Orchestras with conductor Allen Tinkham, to record Winged Creatures, an album of works for flute, clarinet, and orchestra including world-premiere recordings of duo concertos like the title track by African-American composer Michael Abels (Cedille Records). His Portraits, recorded with Demarre McGill and pianist Michael McHale, and Mozart and Brahms Clarinet Quintets, with the Pacifica Quartet, were both released on Cedille Records.

McGill has been covered in the New York Times and the New Yorker and has appeared on National Public Radio, Performance Today, and Mister Rogers’ Neighborhood. He served as the 2015–16 Artist-in-Residence for WQXR. NBC Nightly News and CNBC have both aired stories highlighting the McGill brothers’ inspirational story.

McGill is an ardent advocate for helping music education reach underserved communities and for addressing issues of diversity, equity, and inclusion in classical music. He is the Artistic Director for the Music Advancement Program at The Juilliard School, a weekend program for music students who demonstrate a commitment to artistic excellence, which actively seeks students from diverse backgrounds underrepresented in classical music. This year, in concert with a $30,000 charitable gift from the Avery Fisher Artist Program designated to a charity of McGill’s choice, McGill and Weston Sprott, Dean of the Preparatory Division of The Juilliard School, established the Weston Sprott and Anthony McGill MAP Summer Scholarship Fund so MAP students can take part in summer programs and festivals.

McGill serves on the board of directors for the League of American Orchestras, Cedille Records, and the Harmony Program, and on the advisory councils for the InterSchool Orchestras of New York and Time In Children’s Arts Initiative. Anthony McGill is a Vandoren Artist and Buffet Crampon Artist.