Getting into College 101: Jazz Edition (Online) 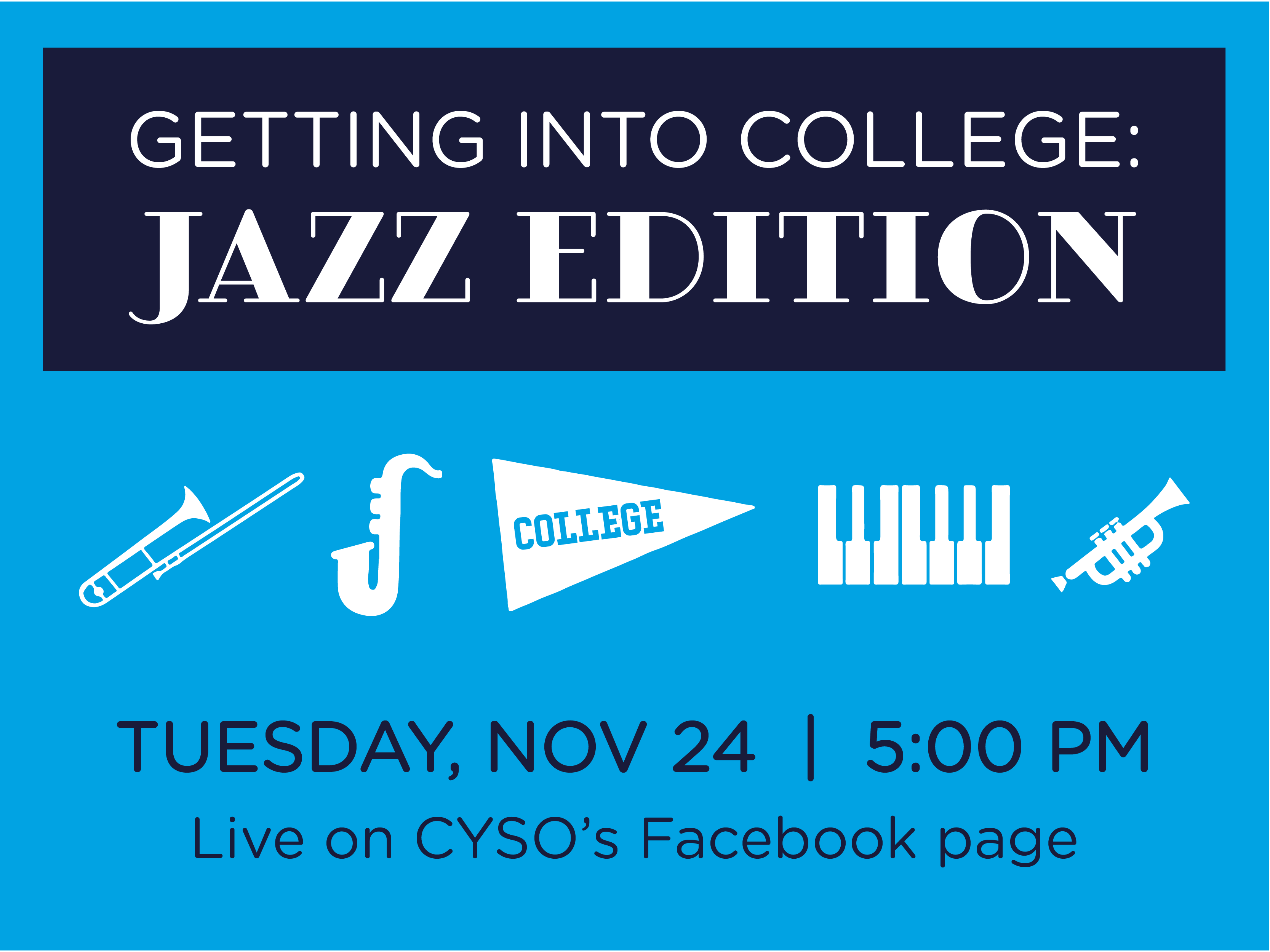 Getting Into College returns, this time tailored specifically to jazz musicians! Join us live on CYSO’s Facebook page to find our everything you need to know about the music admissions process with a panel of jazz higher ed experts from across the country including Juilliard’s Jerome Jennings, Peabody Institute and NYO Jazz’s Sean Jones, Frost School of Music’s Brian Lynch, and NIU’s Reggie Thomas in conversation with CYSO Jazz Orchestra Director Pharez Whitted. Hear what they look for in applicants and what you can be doing now to prepare your audition and application. RSVP on Facebook here. 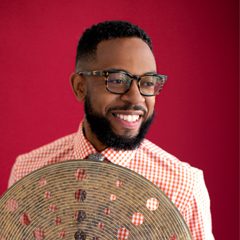 Jerome Jennings is a drummer, activist, bandleader, composer, sideman and educator. His debut recording ‘The Beast’ is a reflection of the every day joys and traumas of black life in the U.S. It was named one of the top three Jazz releases by NPR, received a four star rating in Downbeat Magazine, and was nominated for the prestigious French ‘Grand Prix du Disque’ award for Album of the Year in 2016. Jerome’s sophomore recording, ‘Solidarity’, released November 2019 was recognized by NPR as best music that spoke truth to power
of 2019.

The summer of 2007 Jerome earned a MM from the prestigious Juilliard School in Manhattan NY. Jerome has been the Resident Director of The Juilliard Jazz Orchestra since fall 2017. He passed Jazz At Lincoln Centers Swing University301 history course: The most comprehensive study of jazz from a non-performance perspective, available. Jazz At Lincoln Center has Jerome Jennings on file as an accredited jazz scholar.

Jerome has participated as a spoke on several panels including Chamber Music America: Music, Language, and Revolution; Lincoln Center: Freedom’s State of Mind; Winter Jazz Festival: Jazz & Gender: A Discussion Of Community, Culture & Participatory Allies. Fall 2020, Jerome will co-curate with Naomi Extra, a series of panels, performances and discussions at The National Jazz Museum in Harlem entitled ‘Jazz in The Era of Black Lives Matter.’ 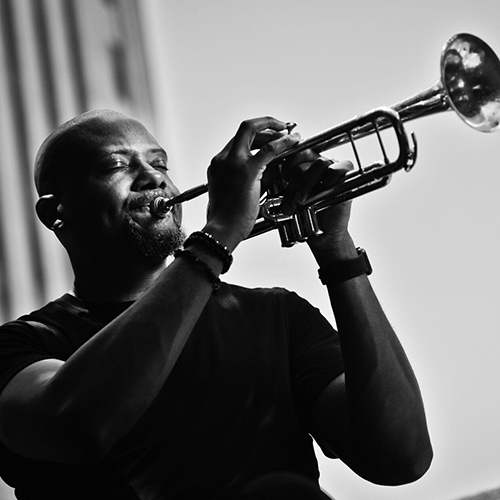 Music and spirituality have always been fully intertwined in the artistic vision of trumpeter, composer, educator and activist Sean Jones. Singing and performing as a child with the church choir in his hometown of Warren, Ohio, Sean switched from the drums to the trumpet upon his first exposure to Miles Davis at the age of 10. Twenty-five years later, he still cites Miles’ overall artistic vision and purity of sound as his greatest personal influence.

But it was another immortal visionary who had a most profound impact when Sean was a 19-year old student at Youngstown State University – the magnificent John Coltrane through his masterpiece, A Love Supreme  – “All at once, everything just came together for me.  My past, my present, my future.  I knew the course I needed to pursue.” Already exhibiting a superb control of the instrument through his private studies with master trumpeter and educator Esotto Pellegrini and his intensive listening to his other primary influences, Woody Shaw Freddie Hubbard and Clifford Brown, the young trumpeter committed himself to artistic excellence the pursuit of transcendence.

Five years later, after receiving his Master’s Degree from Rutgers University, Sean had a 6-month stint with the Lincoln Center Jazz Orchestra. This marked the beginning of a relationship with Wynton Marsalis, whose personal work ethic and ability to break barriers had already made a significant impact on the emerging artist. Wynton offered Sean a permanent position as lead trumpeter and Jones remained there until 2010.

A highly respected and in-demand musician even while at Rutgers, Sean was prominently featured with a number of artists, recording and/or performing with many major figures, including Illinois Jacquet, Jimmy Heath, Frank Foster, Nancy Wilson, Dianne Reeves, Gerald Wilson and Marcus Miller.  The relationship with Miller led to another highly impacting experience when Sean was selected by Miller, Herbie Hancock and Wayne Shorter for their Tribute to Miles tour in 2011.

The trust and support of those giants led Sean to a decision to focus on performing with his own ensembles. Already touring and performing regularly with his own groups while at Lincoln Center, Sean also began his longtime relationship with Mack Avenue Records, for whom he has just released his seventh recording:  im.pro.vise = never before seen.  He’s currently performing with the quartet on his latest CD, who have been working together since 2007 – with pianist Orrin Evans, bassist Luques Curtis and drummer Obed Calvaire.  But Sean is also looking toward projects with new and larger ensembles, including orchestras.  In addition, he’s planning on more forays into the world of Western classical music, while working on solidifying his pedagogy and increasing his lecturing and writing activities.

Heavily involved in education, Sean teaches at Duquesne University in his adopted hometown of Pittsburgh and at the Oberlin Conservatory of Music, while regularly offering master classes and clinics all around the world. In addition, Sean also serves as Artistic Director of both the Pittsburgh and Cleveland Jazz Orchestras and is working toward organizing the various Jazz orchestras all over the country.

Clearly a passionately committed, heavily focused and deeply spiritual man, Sean relies upon his serious study of philosophy – especially that of 13th century theologian and mystic Meister Eckhardt; and Don Miguel Ruiz, whose vision is drawn from the ancient wisdom of the Toltec native people of Southern Mexico – to fuel the pursuit of his expansive and generous vision.

Trumpeter and multi-Grammy© award winner Brian Lynch brings to his music an  unparalleled depth and breadth of experience. A honored graduate of two of the jazz world’s  most distinguished academies, Art Blakey and the Jazz Messengers and the Horace Silver  Quintet, he has received wide acclaim during his long tenures with Latin Jazz legend Eddie  Palmieri and straight ahead jazz master Phil Woods. He has also been a valued collaborator with  jazz artists such as Benny Golson, Toshiko Akiyoshi, and Charles McPherson; Latin music icons  as diverse as Hector LaVoe and Lila Downs; and pop luminaries such as Prince. As a bandleader  and recording artist he has released over 20 critically acclaimed CDs featuring his distinctive  composing and arranging, and toured the world with various ensembles reflecting the wide  sweep of his music. He currently is Professor of Studio Music and Jazz at the Frost School Of  Music, University of Miami as well as conducting clinics and workshops at prestigious  institutions of learning the world over.

Voted Trumpeter Of The Year and recipient of the Record Of The Year award by the Jazz  Journalists Association, Lynch’s talents have been also recognized by top placings in the  Downbeat Critics and Readers Polls; feature stories and highly rated reviews for his work in The  New York Times, Jazz Times, and Downbeat; six Grammy© Award nominations (the latest two  received in 2019 for his Omni-American Book Club big band project), as well as a Grammy win  for Best Latin Jazz Album; and grants from the National Endowment for the Arts, Chamber  Music America, and Meet The Composer. 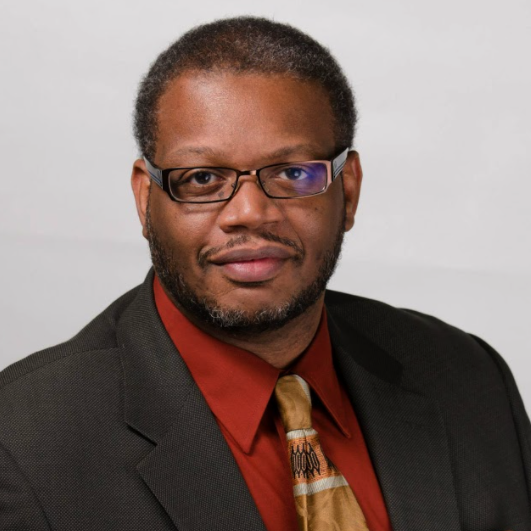 Reginald “Reggie” Thomas is Coordinator of the internationally recognized Northern Illinois University School of Music’s Jazz Studies program. He is the director of the acclaimed NIU Jazz Orchestra (formerly known as the NIU Jazz Ensemble under esteemed Prof Ronald Carter), which has been featured at venues such as the Chicago Jazz Festival.

Reggie has performed at festivals around the world – St. Louis Jazz Festival in Senegal, West Africa; The Montreal International Jazz Festival; and The Java Jazz Festival in Jakarta, Indonesia. After leaving the St Louis area, he also spent 3 years as pianist for the Legendary Count Basie Orchestra with whom he performed at a festival before the King of Thailand. Thomas has performed abroad in Brisbane, Calgary, London, Milan, Montreal, Poznan, Senegal, Sydney, Toronto, Trinidad and Warsaw. He has also performed across the US in cities including Atlanta, Boston, Chicago, Honolulu, Los Angeles, Las Vegas, New York, San Francisco, and Seattle.

As a recording artist Thomas has appeared as a leader or co-leader on four recordings. The most recent, Matters of the Heart (with wife Mardra), was released March 2015 and follows previous recordings Fade to Blue (MaxJazz), Standard Time (Victoria) and 4 (Jazz Compass). Recordings as a sideman include Clay Jenkins’ Yellow Flowers After (Chase Music Group) and Azure Eyes (Chase Music Group), Kim Richmond’s Ballads (Chase Music Group) and Inner Spirit (Jazz Compass), Clark Terry/Mike Vax’ Creepin’ With Clark (Summit) and the MSU Professors of Jazz Better Than Alright.

Reggie remains active with some of the top institutions in jazz and music education including recent travel to South Africa to serve as a juror for the 14th Unisa International Piano Competition 2020. Since 2018 he has served as the ensemble coach for NYO Jazz Orchestra, a national youth jazz orchestra created by The Weill Music Institute at Carnegie Hall and teaches for their Summer Music Educators Workshops. From 2004-16, he served as a clinician and education consultant for Jazz at Lincoln Center, working with the Essentially Ellington Program and Band Director Academy. Since 2011 he has worked with the Herbie Hancock Institute of Jazz (formerly the Thelonious Monk Institute of Jazz) serving as accompanist for the Thelonious Monk International Jazz Competitions. He has recently returned from performances at The Smithsonian National Museum of the American Indian and the John F. Kennedy Center for the Performing Arts accompanying the 2019 Herbie Hancock International Jazz Guitar Competition.

Thomas has directed All State Jazz Bands, Combos and Jazz Choirs in Illinois, Iowa, Kentucky, Maine, South Dakota and Tennessee and directed the first ever Missouri All-College Jazz Band. He has served on summer jazz faculties across the country and abroad including the IAJE Teacher Training Institute, the Birch Creek Music Center, the Eastman School of Music Summer Jazz Camp, the Summer Jazz Academy in Chodziez, Poland, the Barbican Center in London, and the University of Trinidad and Tobago. Reggie has been awarded the Excellence in the Arts award from the Greater St. Louis Arts and Education Council (2005) and was named in Riverfront Times “Best of St. Louis” as Best Jazz Artist (2005).