We’re pleased to announce this year’s Concerto Competition winners for Symphony Orchestra, Philharmonic Orchestra, and Concert Orchestra. Competition is fierce every season, but this year’s performances were particularly accomplished—for the first time, judges selected co-winners or honorable mentions in every category.
Concerto Competition winners will perform at CYSO concerts during the 2018-2019 season, so stay tuned for details as concert programs are announced next year. Read on to learn more about this year’s winners. 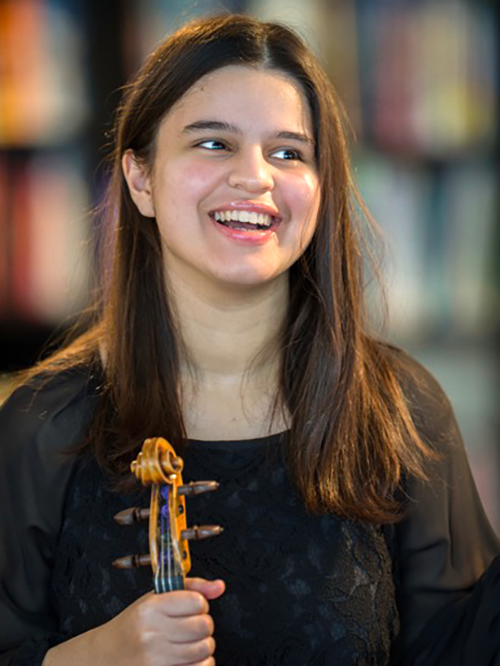 Equally at home in her roles as a solo, chamber, and orchestral player, Rabia Brooke is an award-winning Chicago-based violinist whose performance experiences span a wide range of repertoire, styles, and collaborators. This season Rabia joins the Peoria Symphony Orchestra at Ravinia, performs at the Musique dans la Gers in France, Fifth House Ensemble in Chicago, as well as solo violin recitals at Curtiss Hall, Pianoforte, and Buckingham Salon Series. Last summer, she toured Central Europe with CYSO and participated in the Curtis Summer Fest, serving as concertmaster of the YASP Orchestra under the baton of Joshua Gersen of the New York Philharmonic, performed with the Formosa Quartet and Black Oak Ensemble. Previous projects include: a European tour with Daniel Rowland for the filming of The Beethoven Documentary; premiered Athena Triumphant String Quartet by award-winning composer, Stacy Garrop; live solo broadcast on WFMT’s Introductions; solo and chamber works with banjoist Noam Pikelny and bluegrass band, Special Consensus for Kellogg. Rabia has garnered awards from Curtis Institute, Society of American Musicians, DePaul, Enkor, Discover, American Protégé, and Chinese Fine Arts Society. She serves as co-concertmaster of Symphony Orchestra and is a member of the Asrai Quartet. Passionately playing violin since the age of three, she studies with Lei  Hou of the Chicago Symphony Orchestra, Alexander Belavsky of the Lyric Opera Orchestra and has performed in master classes for Daniel Rowland, Rachael Kolly d’Alba, and Ani Kavafian. Currently, she studies with Desirée Ruhstrat. Rabia performs on the ‘Earl of Falmouth’ Stradivari of 1692 on generous loan from Bein and Fushi. 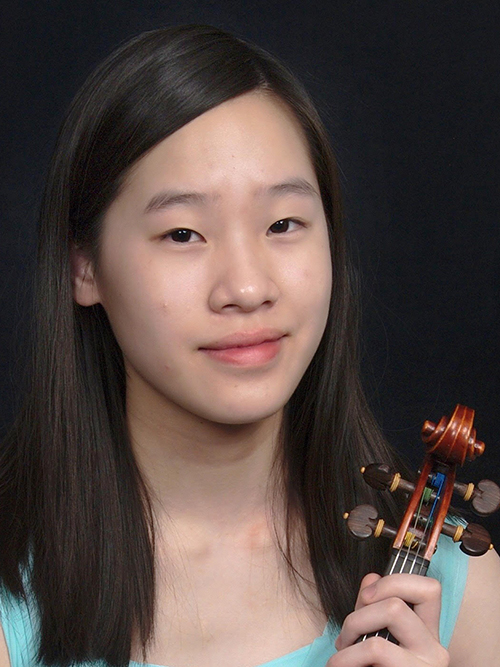 Hannah Lin, 17, is a junior at Fremd High School in Palatine and studies violin with Desirée Ruhstrat. In 2015 and 2017, Hannah won first place in the Chinese Fine Arts Society Competition and was the category winner of the Early Music division of the 2015 Walgreens National Concerto Competition. She was awarded honorable mention in the Chicago Symphony Orchestra Young Artists Competition in 2017. Hannah is the first violinist of Quartet Callisto, which was awarded in the Discover National Chamber Music Competition in 2017 and 2018 and selected to be a quarterfinalist in the Fischoff National Chamber Music Competition in 2017 as well as a semifinalist in the MPrize Chamber Arts Competition in 2018. She has served as concertmaster for CYSO’s Debut, Concert, and Symphony Orchestras, and currently serves as co-principal in Symphony Orchestra. In the District 7 ILMEA orchestra, she served as assistant concertmaster in 2015 and as second violin principal in 2016. In 2017, Hannah was second violin principal of the Illinois All State Honors Orchestra. She regularly performs at nursing homes, and outside of her musical endeavors, she is a news editor of her school newspaper, a peer tutor, and a volunteer at her local hospital 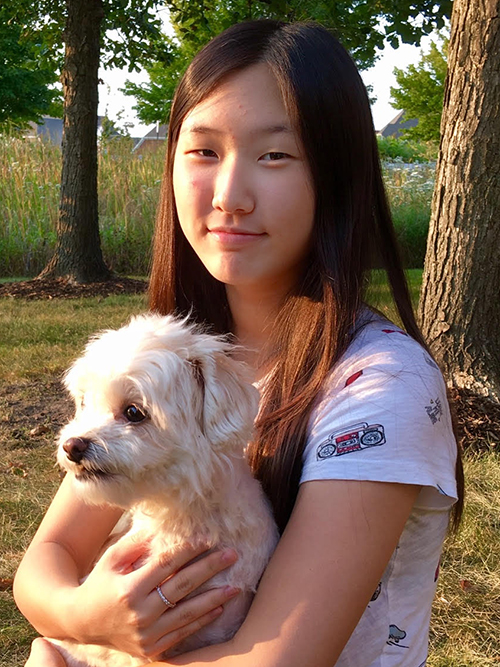 Kelly Kim, 13, is an 8th grader at Maple Junior High in  Northbrook.  She has won various prizes in competitions including the Granquist Competition (2012, 2013), the Chicago International Music Association Competition (2014), the INPASS Music Competition (2011), the Festival in Honor of Confucius (2015, 2017), and the Society of American Musicians (2017). She has performed at the United Center for a Chicago Bulls game where she was selected to play the violin during the halftime Talent Show. She has been the Co-Concertmistress for the CYSO’s Philharmonic, Debut, and Concert Orchestras as well as Preparatory Strings. She was also the Co-concertmistress of the Wescott Elementary School Orchestra, and of Maple School’s Chamber and String Orchestra for the past two and half years.  She has participated in numerous chamber groups at the Music Institute and the Music Academy of Chicago Ensemble. In 2017, Kelly was selected to perform in a masterclass for Stephen Rose, the principal of second violin of The Cleveland Orchestra. She also participates in the Chicago Youth in Music Festival Symposium with the world-renowned cellist Yo-Yo Ma (2017). Kelly has been a Merit Scholarship recipient for the past two and a half years. Her volunteer works include benefit concerts for Apna Ghar, ARK for youths of Chicago, and the Butterfly team for the “Comfort Women” of war. Kelly loves to sing, write, play with her dog, and bake. She currently studies with Sang Mee Lee at the Music Institute of Chicago.

Zoe O’Shaughnessy, 15, has been playing harp since age 7 under the direction of Marguerite Lynn Williams, Principal Harpist of the Chicago Lyric Opera Orchestra. She has been a member of CYSO’s Philharmonic Orchestra since 2016 and a member of the Chicago Harp Ensemble since 2011. Zoe has performed at Lyon & Healy Harps’ Summer Concert series student showcase, won first place in the Greater Chicago Chapter American Harp Society Scholarship Competition Junior Division in 2012, received honorable mention in the 2014 competition and has been selected to perform at Harp Day through the Greater Chicago Chapter of the American Harp Society in 2012, 2014 and 2015. She won the Northwest Indiana Symphony Orchestra Young People’s Competition in 2014 and 2017. Zoe is a sophomore at Munster High School in Munster, Indiana, where she is a member of the state award-winning marching band, playing percussion, and state award-winning Wind Ensemble as its harpist. She was selected as harpist for the Indiana All-State Orchestra in 2017. 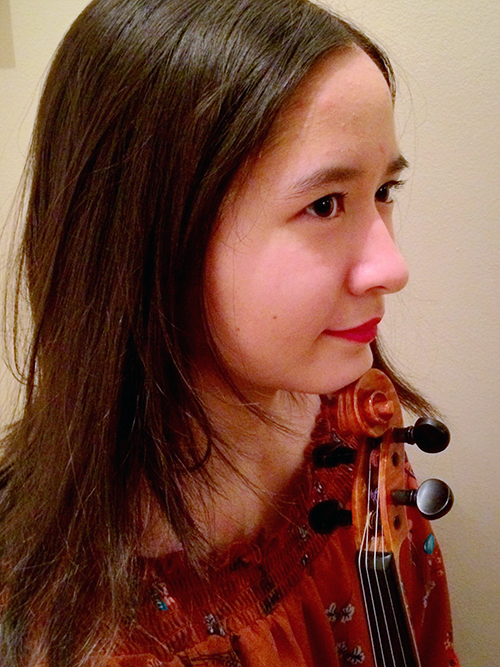 Yuki Santibañez, 13, began playing the violin at Sherwood Community Music School when she was five years old.  She has been a member of CYSO orchestras for over five years and been concertmaster in Preparatory Strings, Debut and Concert Orchestras. Yuki has received honorable mention recognition at the Annual Music Festival in Honor of Confucius, the Sherwood Scholarship Competition and twice at the DePaul Concerto Festival.  She was also a finalist at the Chicago Bulls Kids Talent Search. Yuki was invited to participate in the Sphinx Performance Academy where she was selected to perform at Rachel Barton Pine’s masterclass and had the opportunity to play chamber music under the coaching of Sami Merdinian and Karla Donehew Perez. Yuki has studied with Christie Keiko Abe and Aurelien Pederzoli.  She currently studies with Miki Yuasa. 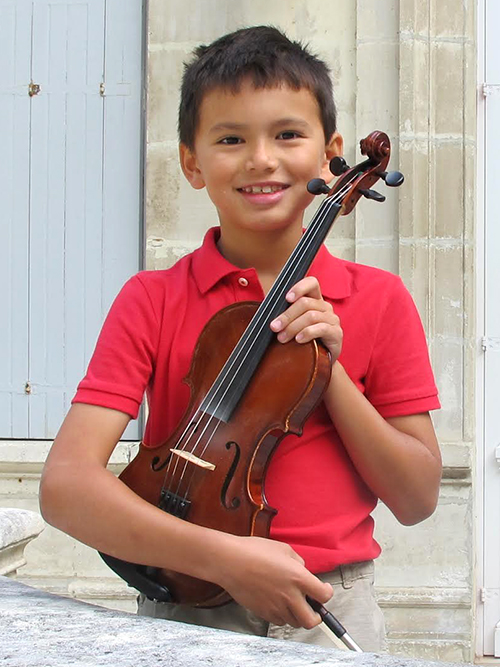 Henry Auxenfans, 10, is an avid violinist and pianist. Henry serves as the Concertmaster of CYSO’s Concert Orchestra, and was previously the Concertmaster of Debut Orchestra. He has won several competitions, including first prize of the Sejong Cultural Society’s competition, resulting in a Chicago Cultural Center performance, and HM with Distinction of Depaul Concerto Festival (the youngest prize winner of the Senior Division, 2018), a top prize winner in SAM Competition, and is a first prize winner of the Sherwood’s scholarship competition. Henry has been invited to play at the Illinois Piano Federation of Music Club’s Honors recitals  five times. He is a piano Gold Medalist at the CAMTA sonata festival and a top prize winner at Roberta Salver’s contest. Henry studies with Stacia Spencer at Northwestern University and previously with Emilia Blaszak. He is a member of the Plymouth Quartet, coached by Lawrence Newman of CSO. His piano teacher is Laura Fenster. Henry contributes to his community regularly by sharing his love for music with audiences at local churches, senior homes and libraries with his brother Louis. Besides music, he enjoys tennis, soccer, cooking, writing, science and math.

Congratulations to each of these young performers on their tremendous achievement!