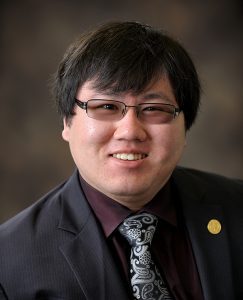 Violinist Cyril Wang performed with CYSO for seven years—four as a member of Symphony Orchestra and three years in Concert Orchestra. A 2014 graduate, Cyril also joined us on two international tours, traveling to Spain in 2012 as a high school sophomore and to China in 2014 as a senior.
As we prepare for CYSO’s upcoming tour of Central Europe this June, we spoke with Cyril to find out why going on tour with Symphony Orchestra was such a memorable experience for him, and to hear his advice for current students as they embark on a CYSO tour for the first time.

“It’s more than just a great opportunity for you as a musician; it’s a chance to expand your horizons.”

What was your favorite part about going on tour with CYSO?
There was so much to love about the tours that it’s hard for me to pick one favorite part. I really loved being able to spend time with all of my peers while abroad, experiencing the culture through museums, guided tours and, of course, food. I’m sure the experience would have differed greatly if I had visited just with my family.


Do you remember the pieces you played?
Luckily enough, I remember all of the pieces we played. During the Spain tour, we performed Strauss’ Don Juan, Borodin’s Polovtsian Dances from Prince Igor, Barber’s Second Essay, and Tchaikovsky’s Symphony no. 5. We also had (the other) Strauss’ Radetzky March and Smetana’s Dance of the Comedians for encores.
During the China tour, we performed Brahms’ Variations on a Theme by Haydn, Stravinsky’s Symphony in Three Movements, Long’s Rhyme of Taigu, and Bartok’s Concerto for Orchestra. For encore, we played the Flying Theme from E.T. by John Williams.

“One of the best parts of going on tour is learning about the culture wherever you visit. It’s a great opportunity to expand one’s worldview.”

How was performing on tour different from other CYSO performances?
For one, we performed in many different venues, so every concert was unique. The atmosphere at every concert, in general, was more relaxed than our typical concert at Symphony Center. But I felt we also had a greater artistic duty to show the audience in every city what world we would show them with our music. And while I don’t wish to say that the typical CYSO performances were not enjoyable, every concert we finished on tour brought a great sense of gratification, beyond what we could have experienced at home.


What was your most memorable experience playing on tour?
For this, I would have to go with the final concert during our tour of China, in Shanghai. I recall clearly, after we had played the last note in Bartok, the massive response from the audience. The swarm of people at the front of the stage, scrambling to hand us bouquet after bouquet. The massive applause after I gave a speech in the native tongue. It was the only concert where we performed an additional encore. The entire experience was almost magical, and I honestly will never forget it for as long as I live.

What did you learn from going on tour?
There’s always differences in the culture that you need to be aware of. A great example comes from Spain, where the siesta period in the middle of the day can really throw off your plans if you’re not careful. Even as tourists, it’s important to remember that once you enter a country, you need to be aware of the customs of the land. Also, noting the strange places where we had spent time rehearsing while abroad, it pays to be quick to adapt to the situation, especially when on tight schedules.

What do you think the value of touring is for a young musician?
One of the best parts of going on tour is learning about the culture wherever you visit. It’s a great opportunity to expand one’s worldview. Cultural awareness is a fantastic ability to develop in this interconnected world we live in, and I believe students really should take these chances to appreciate and understand both the differences and similarities that other cultures have to offer. On a more musically related note, performing on tour is a much different experience than performing at home. There is great value in performing in the many various venues one might encounter on tour, as it encourages constant adjustment and adaptation to the space provided. Not only are you experiencing the great concert halls and venues available abroad, you’re also learning a very important skill.

Any advice you would give a current CYSO student about going on tour?
Take advantage of this time to really immerse yourself in the culture. If you can speak the language, engage in some conversation. Appreciate the art. Eat the food. Try all these new things. It’s more than just a great opportunity for you as a musician; it’s a chance to expand your horizons. So see the sights, play the music, and most of all, have fun.

What are you up to now?
I am studying to receive my Bachelor of Science in Mechanical Engineering at the University of Illinois at Urbana-Champaign. Most of my time goes to that and performing my duties as part of the executive board of Pi Tau Sigma, the mechanical engineering honor society. I still am involved with music, though to a lesser degree, playing in the University of Illinois Philharmonia.

Check out more of CYSO's interview series with alumni from all walks of life. READ MORE