Trombonist Michael Cox was a member of CYSO’s Symphony Orchestra in 2012 during his senior year of high school. After attending New England Conservatory of Music for undergrad and completing his Masters in 2018 at Northwestern, he began auditioning for orchestras across the country. As it turned out, the Skokie-native was appointed to his first professional position as principal trombone at Davenport, Iowa’s Quad Cities Symphony Orchestra (QSCO), just across the river from his home state of Illinois.
Accelerando Strings violinist and Social Media Team member Shreya Dudeja recently spoke with Michael to find out about his journey to landing his first professional orchestra job and why it’s so important to stay determined when you’re following your passion for music.

I understand you were recently appointed principal trombonist at Quad Cities. How did you feel when you got this position?
I was pretty happy. I’ve been taking a lot of auditions and they’ve been really hard. Everyone who takes auditions knows how difficult it is, but it was really nice to be successful at one. I was excited to finally start my professional career. I had just finished my masters so I was really looking forward to starting playing in a professional orchestra.

What made you want to pursue music as a career and not just a hobby?
I couldn’t imagine doing anything else, really. In high school I didn’t know what I wanted to do, I just knew I loved to play in orchestras. I loved the sound of an orchestra. I loved the sound of a trombone, and I loved what music can do for people on a personal and emotional level, and I wanted to be a part of that. Not only as a listener, but I wanted to sort of provide that to society and people.

What’s the best piece of advice you would give to someone that wants to be a musician?
I think that discouragement and negativity is part of the process. If you just accept it as part of the process and spin that into a positive light. “Okay, I didn’t play super well in this audition which just means I have to work differently and the next one will better.” I know really famous musicians that have taken like 40 auditions before they won their big job. It’s all about what you do with being discouraged. If you just keep thinking it’s all going to be worth it in the end—which it is—then that’s helpful.


I loved the sound of a trombone, and I loved what music can do for people on a personal and emotional level, and I wanted to be a part of that.

What experiences do you remember from CYSO that really helped you prepare to be a professional musician?
My first concert we did a huge program. Maestro Tinkham was insistent on what he wanted and he was insistent on the high quality that he expected from us. I learned a lot about being articulate in my own mind about what I wanted to sound like and that definitely helped me throughout school, and it still helps me.

Where do you see music taking you in the future?
I’d like to do a lot of teaching, and I want to be a trombone player, but I also want to work with younger students and less advanced students to help them realize early on how powerful music is. It’s something that I don’t think is taught to everyone as early as it should be—the value of how meaningful a piece of music and a performance can be. 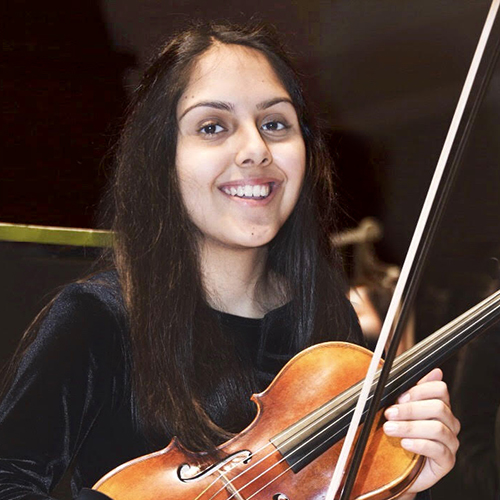 Shreya Dudeja is concertmaster of CYSO’s Accelerando Strings and a member of the CYSO Social Media Team. This is Shreya’s second year in CYSO and she studies violin with David Dai. In addition to CYSO, Shreya is a member of her local youth orchestra as well—Naperville Youth Symphony Orchestra. Shreya is a sophomore at Metea Valley High School.