1977 CYSO alum Barrick Stees has established himself as one of the most respected bassoonists of our time. He serves as assistant principal bassoon of the Cleveland Orchestra, instructor at the Cleveland Institute of Music, and as well as working with Kent Blossom Music Festival. Recently Symphony Orchestra’s Taki Salameh, who will study under Mr. Stees next year at CIM, spoke with Barrick to discuss what it is like to be in a professional orchestra while also teaching at a collegiate level, and how his CYSO experience impacted his career in music.

Could you please introduce yourself however you would like?

My name is Barrick Stees. I am the assistant principal bassoon of The Cleveland Orchestra (TCO) and instructor of bassoon at the Cleveland Institute of Music and the Kent Blossom Music Festival.

What is your background as a musician and how did CYSO play a role in your journey?

I grew up in the far west suburb of Aurora, and I spent my junior high and high school days there. It was natural to go into Chicago to see what was available there for my musical education. I studied with Wilbur Simpson who was the second bassoonist of the Chicago Symphony at the time and back then, everyone I knew who was doing something really high-powered in orchestral music was playing with what we called the Youth Orchestra Greater Chicago [now CYSO].

I think it was freshman year of high school that I auditioned and got in. [CYSO] put me in a bigger pool of talented players from the area and opened my ears to the repertoire of the orchestra, and just good networking. A routine of rehearsing in the ballroom at the top of the Fine Arts Building every Saturday morning was very cool. That was a very helpful way to start my musical education.

How did your musical journey expand after high school?

The other formative influence on me is what was then called the National Music Camp, which is now the Interlochen Arts Camp. During the year I would play in CYSO and in the summer, I’d go up to Michigan [to Interlochen].

My generation did not do the extensive college research that this generation now does. I knew of a few teachers at some schools but I did not really have a working knowledge of who their alumni were, what they were doing, and so on. When I was at Interlochen, a couple of the faculty members also taught at Peabody Conservatory. They held a competition every summer for a full scholarship to Peabody, and I won that scholarship. So I included Peabody on my audition rounds, and I went to Baltimore.

There I had a lesson with Phil Kolker, Principal Bassoonist of the Baltimore Symphony. During the lesson he said, “I see you’re going to Rochester to play for David Van Hoesen. If you get into Eastman, I wouldn’t second guess your decision to go there.” Phil was one of Van Hoesen’s most successful former students, but I didn’t know who he was at the time, I just knew Eastman was a good school. I ended up going to there and had four years studying with David Van Hoesen who had a strong influence on me musically and I would say personally as well. Eastman was a terrific place for me to grow.

What has your experience been like with The Cleveland Orchestra? What do your responsibilities include?

I started my position there with TCO in late February of 2002, so that’s 20 years now. As assistant principal bassoonist, I can be in any single concert playing principal for the whole concert if our principal bassoonist is off; more typically I will play on one or two pieces. If there are three or more bassoon parts, I will be playing the third bassoon part, and very occasionally I will be playing some second bassoon as needed.

How has playing in a professional orchestra developed your playing?

Moving from teaching full time to playing in a world-class orchestra, the biggest change was actually in my reed making. When you teach—to be honest with you—you can manage to play on a mediocre reed and still sound good enough. But in an orchestra like TCO, you really need to have a reed that is like 1 out of 25 or 1 out of 50 that you make to play up to level with your colleagues. It is very noticeable when you are playing out of tune, so your sense of intonation must be acute.

It seems like joining a major orchestra would be a huge transition—was it?

No, actually I have to say it wasn’t a very big transition for me. That is because I was very tough on myself when I was teaching. I took auditions, subbed in major orchestras, and recorded three solo CDs. I was very concerned about my playing going downhill. The Cleveland Orchestra has a pretty long tradition of how they play things. My teacher Van Hoesen played in the Cleveland Orchestra for a few years and always shared those recordings with us. I like to think I was raised in that tradition a bit, and I found it quite familiar and with a few exceptions very comfortable. Playing in a major orchestra is both very easy and very difficult. Very easy because you have a good sense of where the pitch is. Now it is difficult because if you are not able to do that at all times, then that is hard.

How did your time at CYSO help prepare you to become a professional musician?

In that bassoon section with me were some people who went on to be very successful in the field. Norbert Nielubowski, contrabassoonist of the Minnesota Orchestra bassoon section; Timothy McGovern, the professor at University of Illinois Urbana-Champaign ;and David Pierce, retired professor of bassoon at Eastern Michigan University were in that section. It was helpful to latch onto their already-mature playing, especially considering that they were mostly older than me. I also was the featured soloist with the orchestra in 1977, I played the Weber Andante and Rondo.

What is your favorite memory from CYSO?

There are a couple of memories, one is playing that concerto with the orchestra. The room at the top where we rehearsed [Curtis Hall] was just a really elegant room and very boomy, so there were just a lot of people really filling up the room. And just playing in Orchestra Hall was amazing for me, it was a dream.

In your experience, how does preparing for a professional audition work?

I have information on my website and blog about orchestra auditions. There are a lot of people who want to play in orchestras and not enough jobs. I would turn to studying how Olympic athletes prepare for their event. It is very similar to how musicians prepare for auditions.

A lot of sacrifices are involved, cutting out things in your schedule to devote enough time practicing. The preparation for a particular audition has to start months in advance particularly if you are young, because the audition list will include many excerpts you might not even know. If you play on a reed instrument—particularly oboe and bassoon—you have to carve out a lot of time for reed-making so you can play on an exceptional reed during your audition.

It is a very subjective process in what committees go through when choosing a player. A lot of people waste their time trying to mold themselves into a specific style. To use an analogy, you might be the best apple in the basket, but the person who is shopping ay be looking for oranges, not apples. So you can play your best audition and not understand why you weren’t selected. To sound your best and to sound genuine, you have to work with what you know and work with what your teachers taught you.

How has teaching enhanced your playing?

Early in my teaching, I encountered students who did not naturally get things as fast as I did. For example, tongue and finger coordination. I have always had good tongue and finger coordination, but I had to find a way to reach students who didn’t have that ability naturally, and so, taking that apart and analyzing it was helpful for them, but it was also helpful for me in moments where I had trouble. I had to figure out what was going on whenever I was playing and it allowed me to become a better problem solver for myself, which resulted in my playing greatly improving. Teaching feeds the playing and the playing feeds the teaching.

What advice would you give to young musicians who are looking to pursue a career in Western classical music?

This is gonna sound a bit negative, so forgive me, but I think it is true. If there is anything you are passionate about that doesn’t involve music, you should consider doing that, because it is so difficult finding a job with benefits and pension. A lot of us are fine with that amount of risk, because we love classical music and it enriches and fulfills us, and we love sharing it with other people. That is a noble thing. A lot of us have chosen to sacrifice and lower our expectations in certain areas of life because we feel so enriched by the choices we make and the passion we have. Society doesn’t always look favorably on those choices, but our culture actually needs artists, whether it acknowledges it or not. 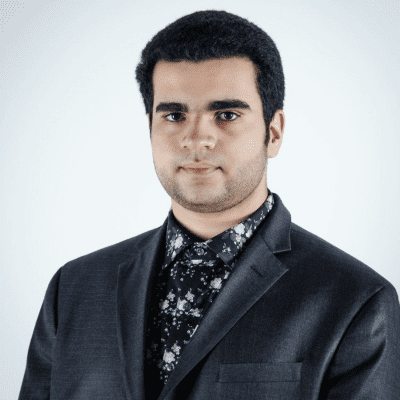 Taki Salameh is a composer and bassoonist who aspires to connect people together through music. As a composer, Taki works closely with performers to write music not just for people, but with people. Taki studies bassoon performance at the Interlochen Arts Academy under Dr. Eric Stomberg.