Of the CYSO alumni who go on to be professional musicians, many also find themselves teaching music as well. And it’s not uncommon that these alumni teachers send their students to CYSO with the hope that the young musicians have the same enriching and memorable experience that their teachers remember from their time in the orchestra. One such example is 1990 alum Hideko Amano.

A flutist and educator from Palatine, Illinois, Ms. Amano runs a bustling private studio and teaches at Carthage College, Harper College, Northeastern Illinois University, and the University of Wisconsin – Parkside. Many of Ms. Amano’s students have been involved in CYSO over the years. One such flautist is current Symphony Orchestra member Anika Veda, a former student of Ms. Amano, who recently sat down with her to discuss Hideko’s time in CYSO, which she regards as some of the most important years of her early musical life.

Do you remember what your CYSO audition process was like?

Back then when I was in CYSO, there was only one youth orchestra in the entire city. It was much more competitive, but the [playing] level today is much much higher, even with all the different orchestras. I think the level of music education over the past 30 years has definitely progressed so much.

I auditioned at the end of my sophomore year and was in the orchestra for my junior and senior year. When I first auditioned at the end of my freshman year, I really wanted to get in. The conductor of CYSO at the time was also the conductor of the Harper Symphony, where I’m from. He saw that I was from the area and said, “You are very, very talented but aren’t at the level that you need to be at. Don’t feel discouraged, try again next year.” These days, we are more concerned over what to say to the student, so no auditioning conductor would ever tell you a personal opinions like that at the end of an audition! So, I tried again at the end of my sophomore year and I got in. For two years, it was my everything. I really wanted to get into CYSO and I was thinking about the audition every single day.

What is your favorite memory from your time in CYSO?

My favorite memory was when I won the concerto competition and was able to play the Chaminade Concertino at Orchestra Hall with Michael Morgan, who passed away last year. It was very sad to hear, given that he was still rather young.

Participating in the concerto competition and playing at Orchestra Hall as a soloist was a fantastic experience, but even more exciting was going on the European tour; it was phenomenal! We went from Germany to France to Switzerland and to Hungary. In Vienna, we were actually able to play at the Musikverein, home to the Vienna Philharmonic.

The tour experience was very memorable especially working with Michael Morgan. Michael Morgan didn’t seem to be a very approachable conductor; he was much more professional. We were all a little scared of him. It wasn’t like he was our friend, I mean, he was the conducting protégée of Sir Georg Solti! He was a very serious conductor.

At the same time, he gave us such encouragement. Some comments he gave me during the tour or even through conversation, were so encouraging like: “Don’t ever give up, you are so talented!” and “Keep going!” As an 18 year old, hearing this from such a high caliber musician, made me really believe in myself. That experience kept me going, even at the New England Conservatory. I could hear Michael Morgan encouraging us and telling us that we would be able to make it in music.

How did you start playing the flute?

Classical music is very involved in Japanese music education. When I was in third grade in Japan, my music teacher played the first flute solo melody from Grieg’s Peer Gynt Suite. It was like lightning struck me! I asked the teacher, “What’s this instrument?” and the teacher said, “That’s a flute.” I was already playing recorder at the time because it’s required to learn it at school, but I wanted to play the flute! My parents said, “No, we’ve been giving you piano lessons, but you don’t even practice piano! You can’t even find a flute teacher in our area.”

So for four years, I really wanted to play the flute, but it didn’t happen. When I moved from Japan to the United States, someone told my parents that if you get involved in an orchestra or band at school, even if you don’t speak English, it’s an easy way to make friends. That was an opportunity for me to ask for the flute, so I started playing the flute in 7th grade.

How did being a member of CYSO impact what you wanted to do professionally? What led you to pursue music?

It was the best youth orchestra and I made a lot of friends. Back then, there were around 5-6 of us from the Harper area and we took the train to and and from rehearsals together. It was like an adventure with friends! I don’t think I would have made it through to a higher level of music education without my time in CYSO.

Did you have any teacher or mentors that left a lasting impact on you as you continued flute?

Of course! There was my teacher Susan Levitin. There were at least 2-3 of her students in the section and she made us feel like siblings. Without her, I wouldn’t be here today or [have been] in CYSO!

Another influential mentor I had was Jeannette Kreston. CYSO grew a lot during her time as executive director. In the 80s and 90s, she had her own children in our orchestra together; they were around my age. When I came back to Chicago many years later, after my time in Paris, the first couple of concerts were organized by CYSO and they invited me back to give masterclasses. Eventually, I started sending my own students to CYSO! They really helped me develop my career in Chicago.

Do you have any advice for CYSO students who are going into music professionally?

Believe in yourself. I am not as high caliber of a musician as Michael Morgan, but you guys can do it. You can do it! It’s a very difficult path, but know what you want and don’t get discouraged; really believe in yourself. I think that’s the key. Keep working hard and meet the right people. Not only should you practice, but get out and meet people. That’s another reason why I love being in the music world. It’s a small world and once you meet one person, they’re always connected to someone you know. But the big bit of advice is to believe in yourself.

Outside of music, what do you like to do for fun?

I love cooking, baking, and walking my dog. Right now, my daily life is teaching. Every single day I’m teaching, but I love teaching. I never wake up and feel that I don’t enjoy it. I’m very blessed with the work I get to do. I also love hearing my daughter, Sophia, sing!

What is your philosophy as a teacher?

I really think that music has to enrich your life. Musical experiences should be something that you experience in different dimensions. For example, a student might have an AP tests coming up. They’re thinking about the upcoming AP tests, that’s just the reality. But when you practice, when you try to express yourself, that can and should be a different dimension that takes you away from thinking about AP tests.

I believe that music should take you to a different world. When I am teaching, I am drilling you from the technique side; it’s more left-brain work. But, my philosophy of teaching and having a musical life is to live in a different dimension. You have to enjoy it. 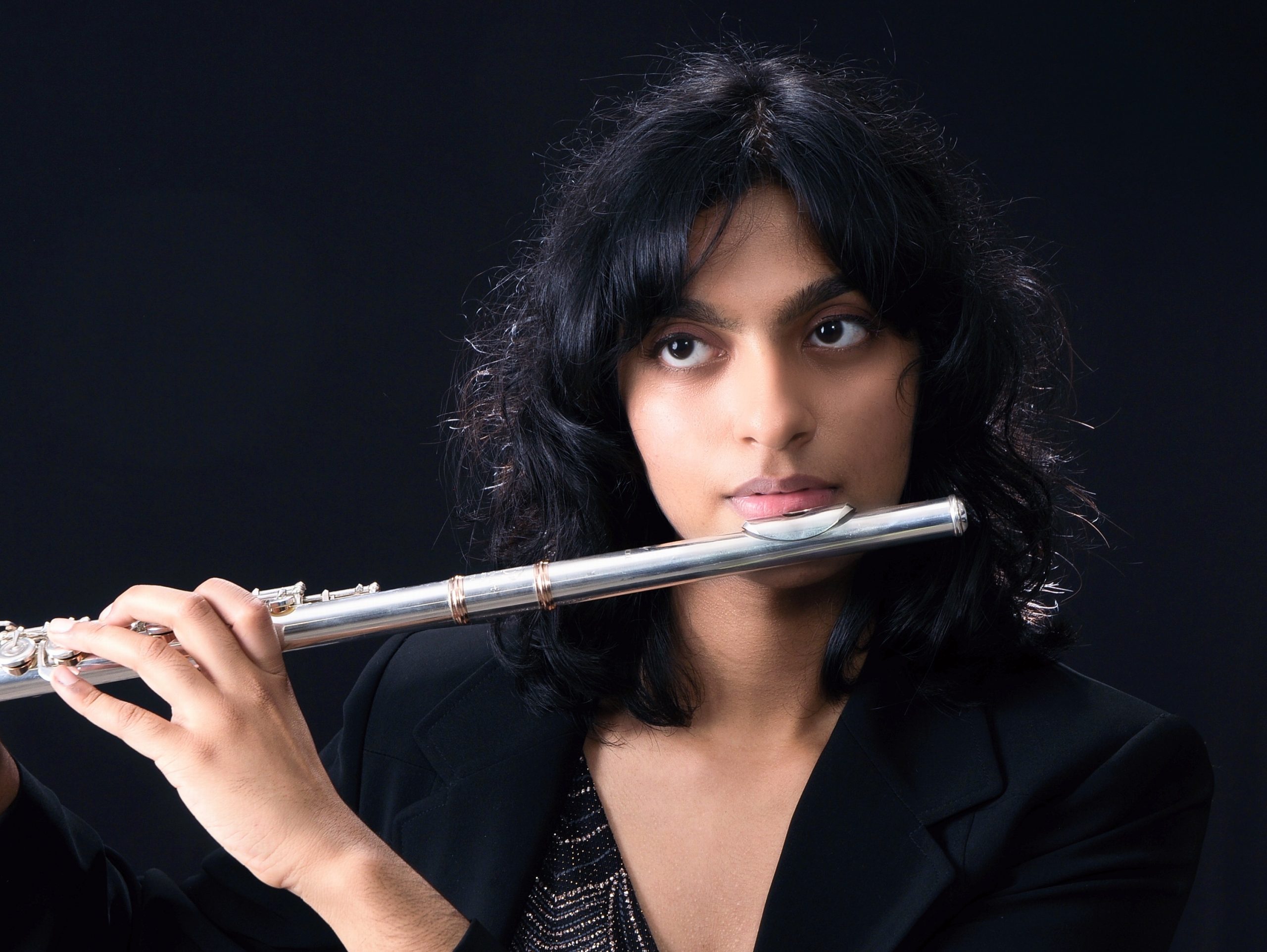 Anika Veda is a senior at William Fremd High School and co-principal flutist in CYSO’s Symphony Orchestra. She is also involved in CYSO’s CORE (Classical Orchestral Repertory Ensemble) and the Chamber Music program. This is her fourth year in CYSO. In her free time, Anika likes to bake and read.