Talk about ending the season on a high note! CYSO’s Symphony Orchestra closed out our 2017-2018 season with two performances AND a recording session with orchestral superstars and CYSO alums, Anthony McGill (Principal clarinet New York Philharmonic) and Demarre McGill (Principal flute, Seattle Symphony).
Starting with the League of American Orchestras conference in Chicago, the McGills were featured in a session entitled “Inclusive and Equitable Orchestras” on Thursday, June 14, 2018. The event was attended by hundreds of orchestral professionals from across the country. 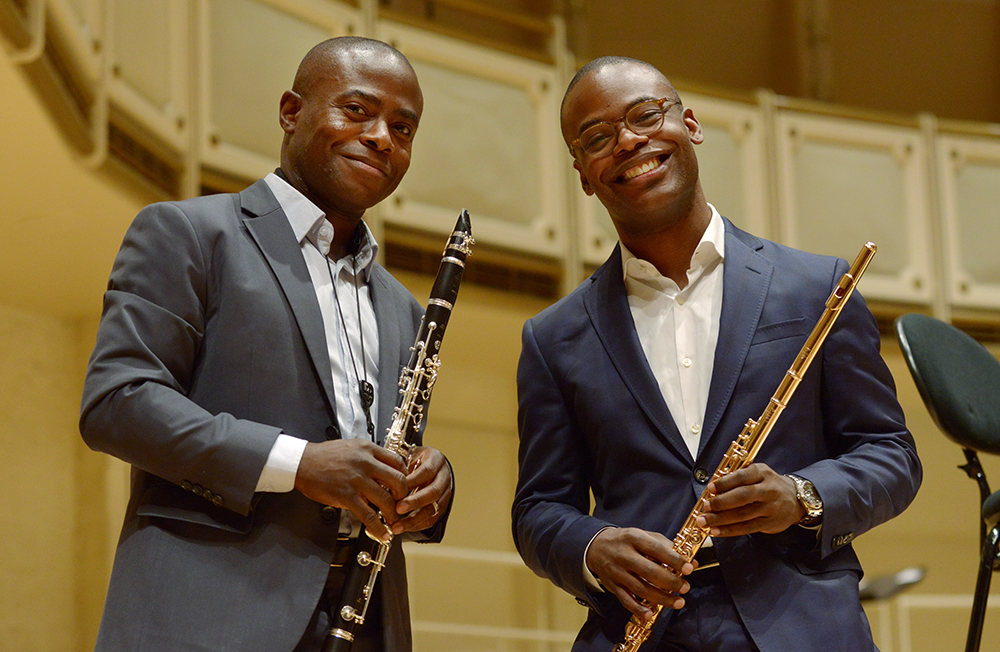 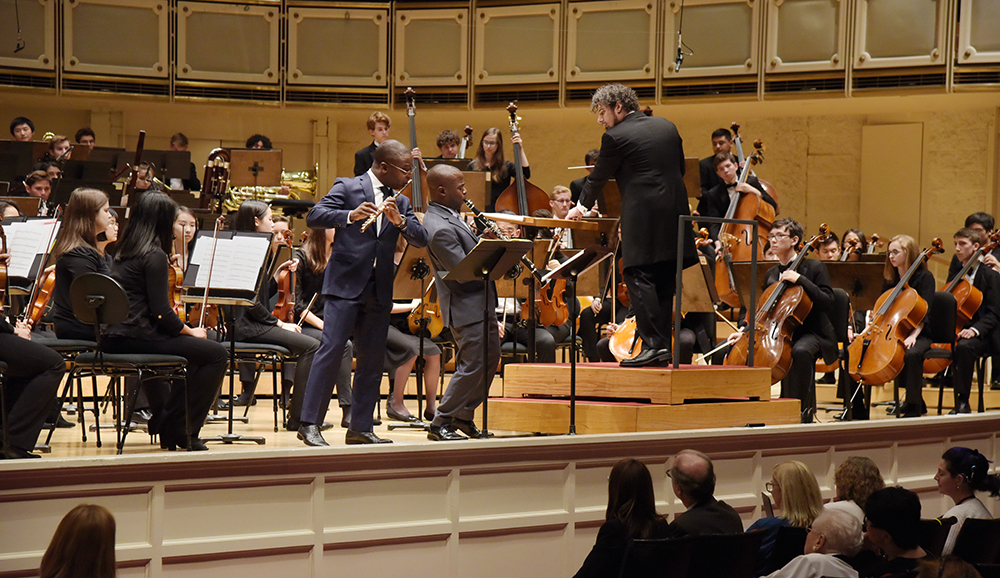 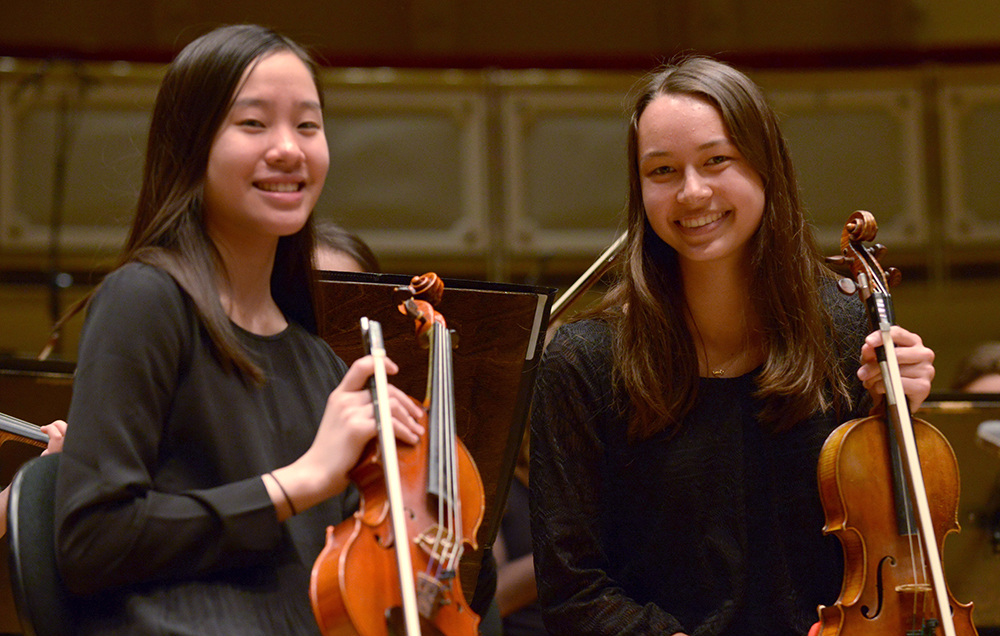 The session opened with a performance from CSO’s Percussion Scholars Program, followed by Symphony Orchestra joining the McGills on stage for the world premiere of Michael Abels’ joyful Winged Creatures, a piece commissioned by Cedille Records. We were thrilled to have Abels in attendance both at that morning’s rehearsal and at the Orchestra Hall performance. 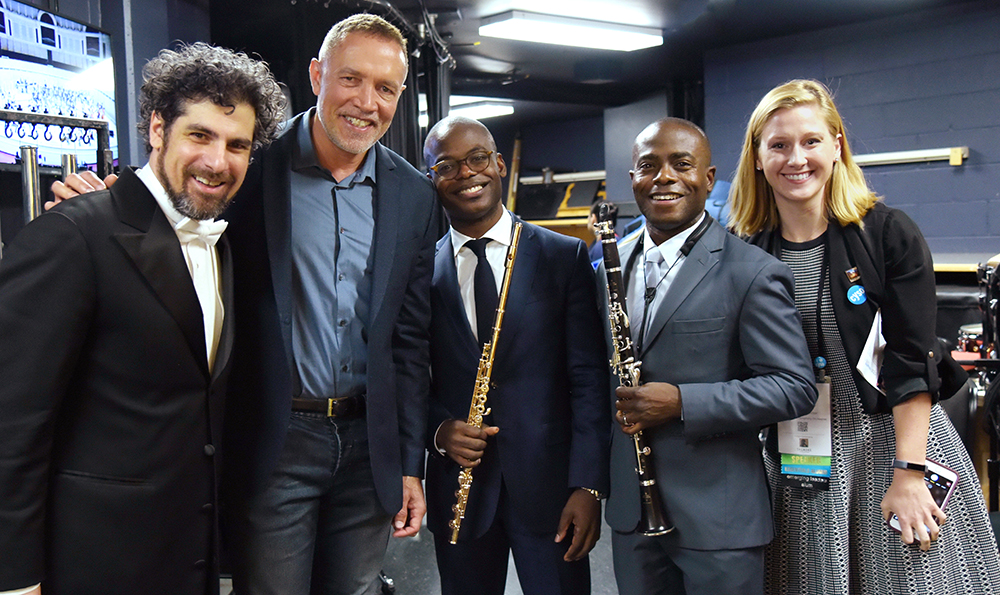 The Abels piece was followed by a conversation with moderated by Jeri Lynne Johnson, founder and artistic director of Black Pearl Chamber Orchestra. The McGills talked about their experiences coming up as young musicians in CYSO and Merit School of Music, and about the mentors and teachers who helped shape their decision to become professional orchestral players. 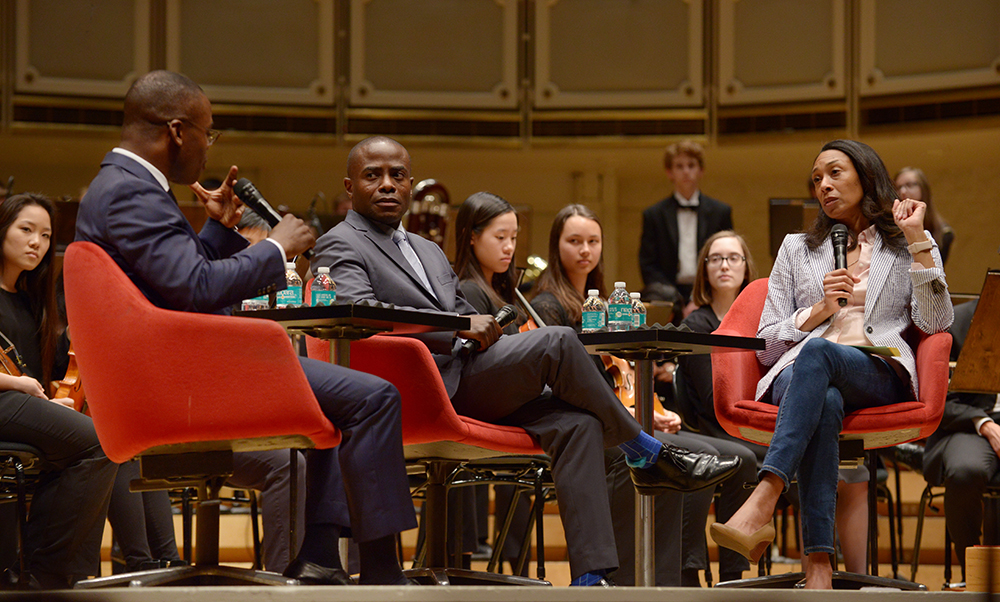 Finally, Symphony Orchestra closed out the session with Barber’s Symphony no. 1 in One Movement. The performance was met with cheers and thunderous applause from the audience of orchestra leaders.
View more photos from the League Conference session.

Following the LAO conference, CYSO presented a free public concert with the McGills on Saturday, June 16, 2018. The performance took place at the Fine Arts Building’s Studebaker Theater and was attended by hundreds of community members and young musicians. 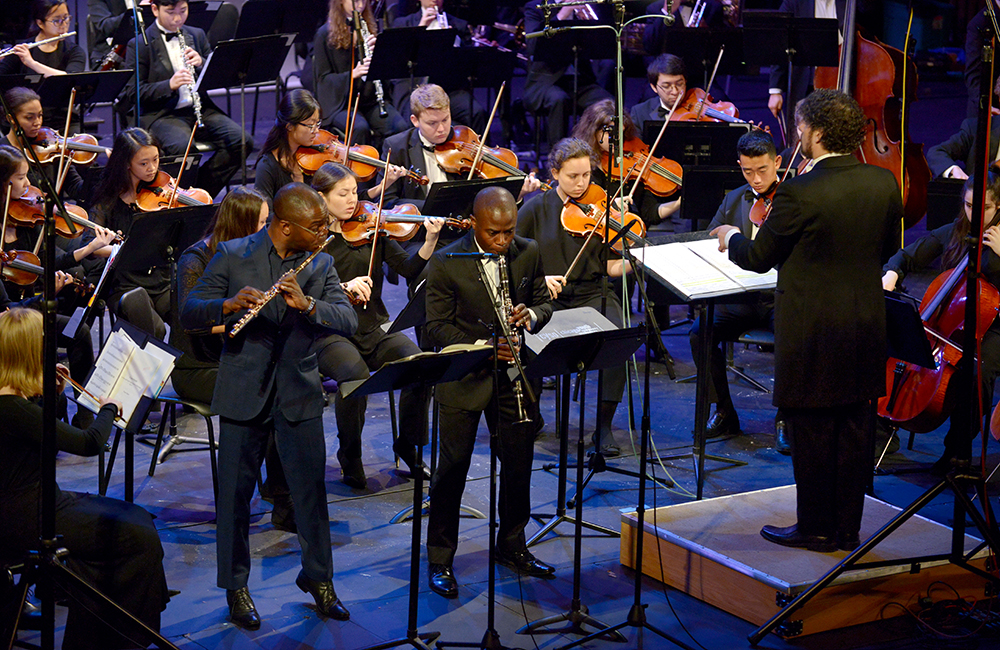 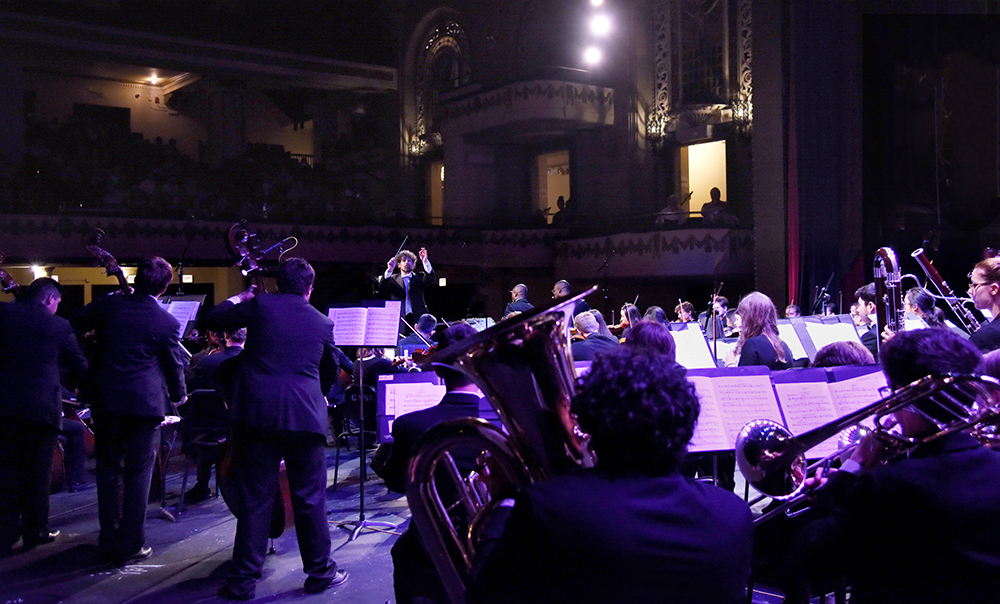 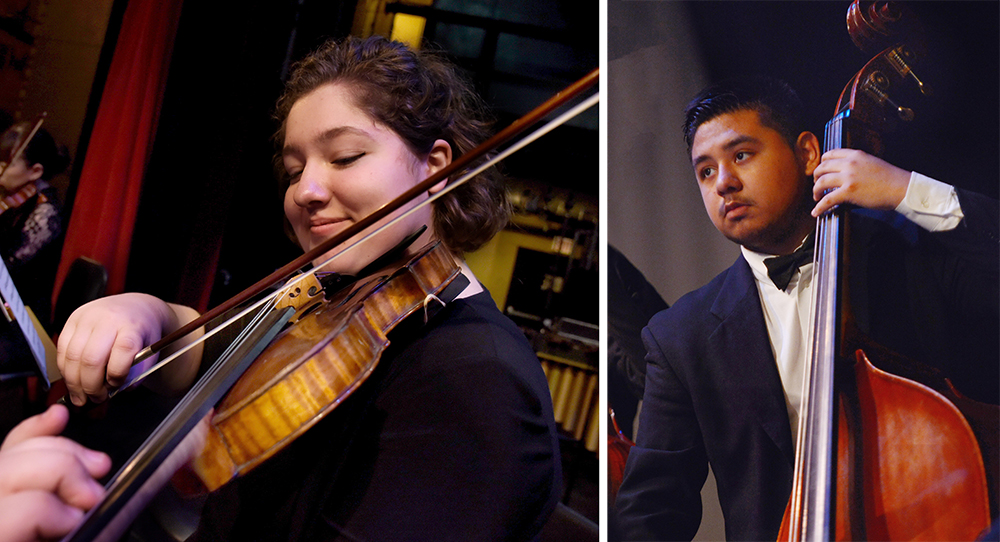 The performance included a second performance of Abels’ Winged Creatures, Franz Danzi’ Sinfonia Concertante for Flute, Clarinet, and Orchestra, Camille Saint-Saëns Tarantelle, and Joel Puckett’s Concerto Duo, commissioned by CYSO in 2012 for another performance with the McGills. 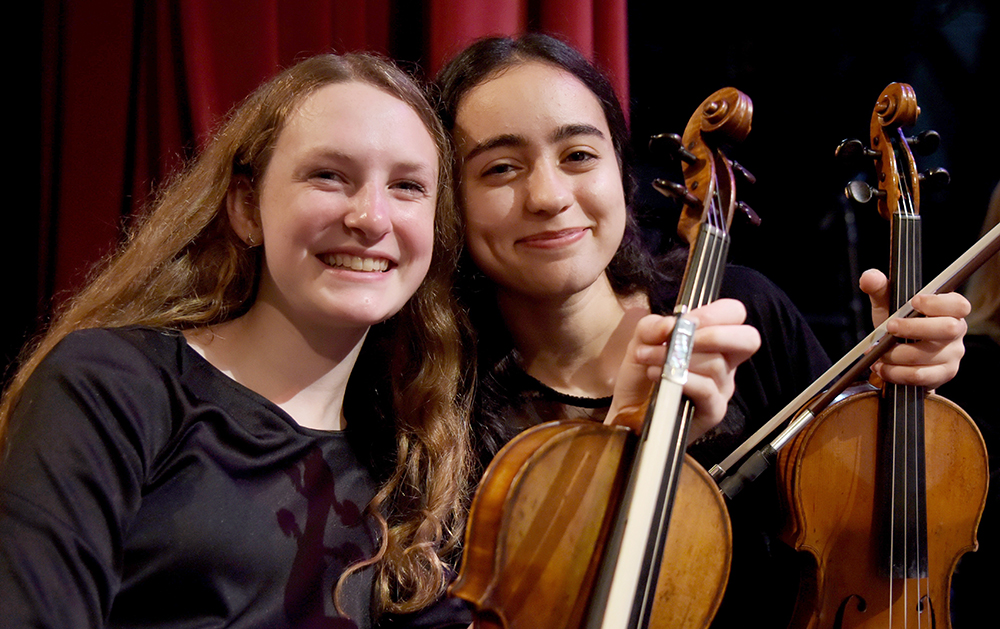 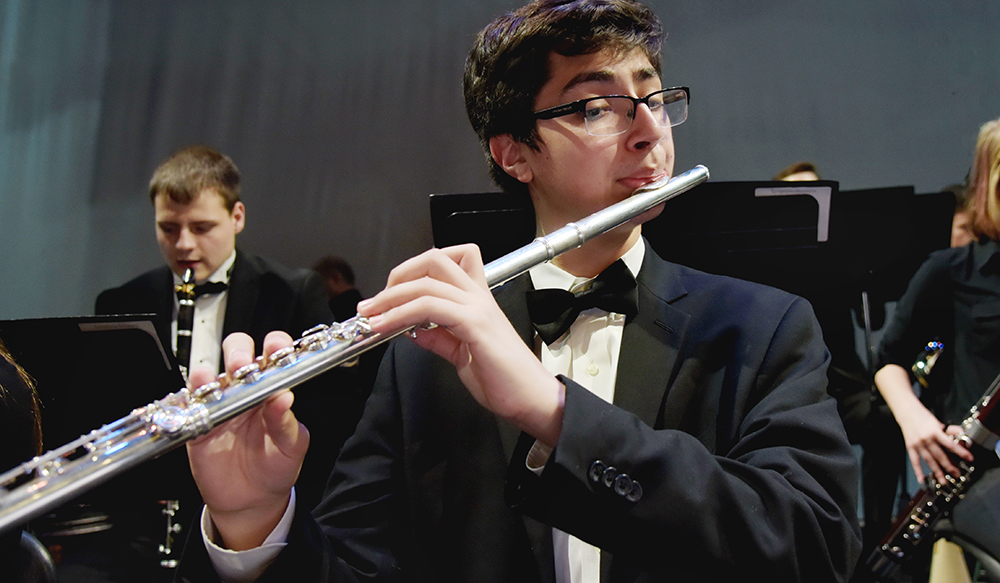 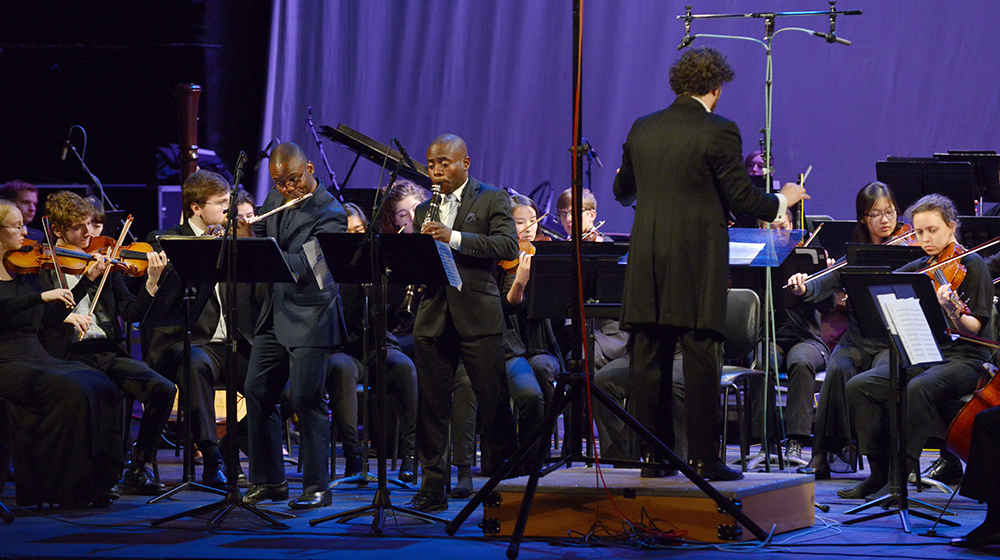 View more photos from the concert.
Following Saturday’s concert, the McGills and Symphony Orchestra stayed on a Studebaker Theater for the next two days for a recording session for a new album to be released by Cedille Records in 2019. This will be CYSO’s first professional recording in more than a decade, and after many (many!) hours of hard work, the recording session finished up on Sunday afternoon, officially closing out CYSO’s season!
Thank you to Anthony and Demarre McGill for sharing their time and talents with our students over the past few days. It was such a treat to reconnect with them, and to allow our students experience their skill, dedication, and willingness to give back to the CYSO community.

This project was supported by New Music USA. To follow the project as it unfolds, visit their program page.