How It’s Made: The Making of CYSO Virtual Performance Videos

As we prepare to launch our second virtual concert on March 27, it’s a great opportunity to learn more about the process that goes into creating CYSO’s digital performance videos. Social Media Team member and Symphony Orchestra violinist Shreya Dudeja recently spoke with CYSO conductors, video editor Christopher Bill, and CYSO students about the process involved in creating a video performance. From selecting the right music to consolidating hundreds of audio and video takes into a cohesive—and convincing—performance, the behind the scenes work of these virtual performances is no small feat!

After years of performing in notable venues like the Studebaker Theatre, Northwestern University’s Pick-Staiger Theatre, the University of Chicago’s Logan Center, and of course, Symphony Center’s Orchestra Hall, switching to an online platform was a shift for all of us. However, our virtual concerts have reached far and wide. “Our kids have been able to reach cities and countries with the performance videos that we wouldn’t have been able to reach if we were performing live. We are able to share music with our families in different ways,” said Daniella Valdez, CYSO Director of String Ensembles. Recently, I had the opportunity to speak with CYSO Music Director Allen Tinkham, Associate Conductor Terrance Malone Gray, and Ms. Valdez about the process of preparing for our first virtual concert cycle this fall. I also spoke to the sound engineer Christopher Bill—who brought together students individual videos and audio submissions— about all the hard work that went into creating CYSO’s virtual performances.

To keep all of us safe, CYSO has had very limited in-person gatherings since March 2020. In face-to-face rehearsals, we used to tune together, take a breath and start together, and crescendo together, but we don’t have that anymore. The conductors and musicians have all had to find new ways to build relationships and connect with each other virtually. Instead of laughing with our friends across the room when the conductor drops their pencil for the fifth time, we type “lol not again” in the Zoom chat. 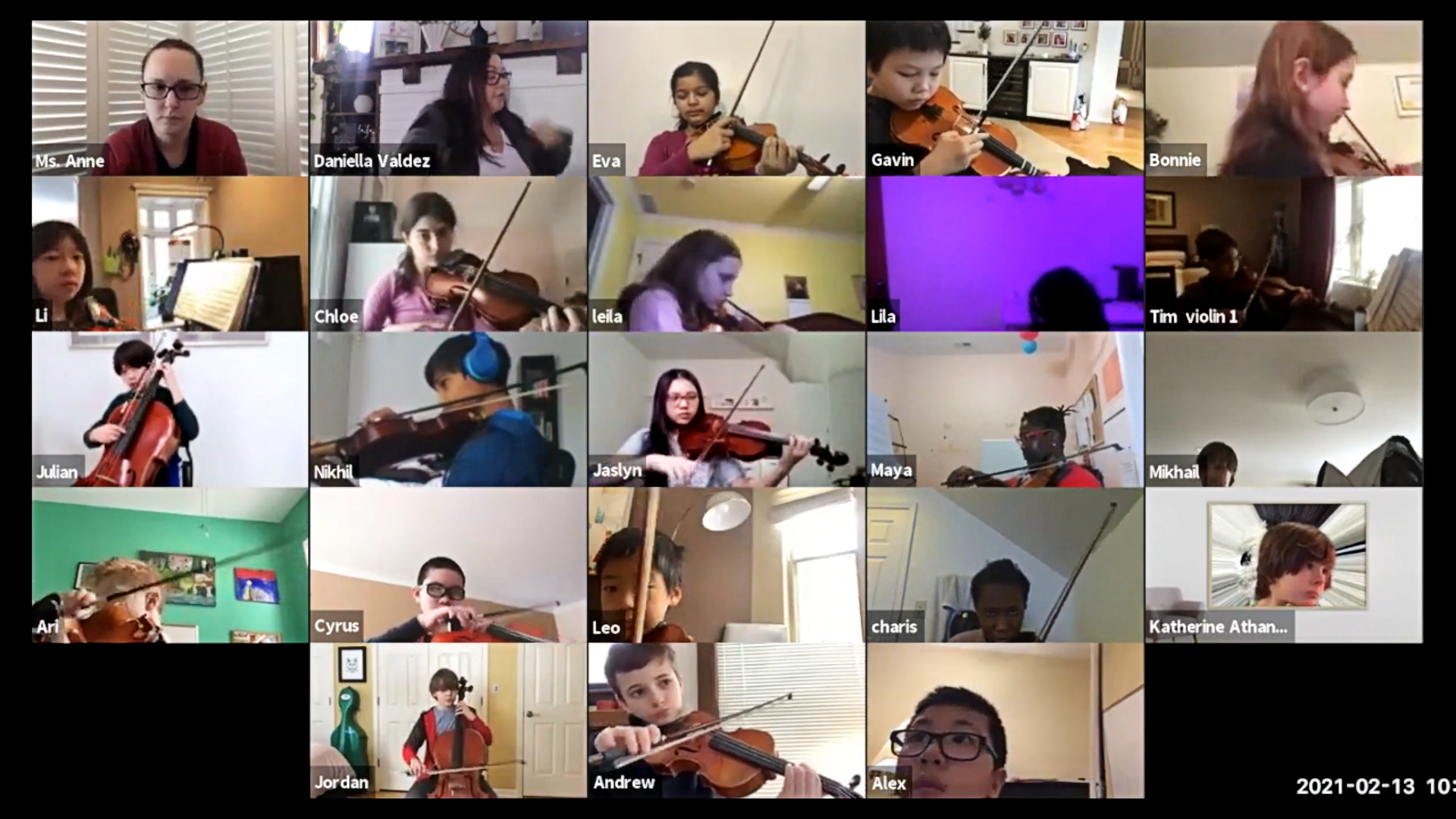 Students play together (on mute) during a Prep Strings rehearsal

As musicians, we have adapted to the new virtual environment and made adjustments to the way we learn. Our conductors have worked incredibly hard to teach us in a meaningful way during online rehearsals. Maestro Tinkham, Mr. Gray, and Ms. Valdez all agreed that their many years of experience in conducting has been integral in planning for virtual rehearsals when students aren’t physically in front of them. Mr. Gray said that because he knows the pieces, he can anticipate the portions of the music he would want his students to work on at home and in sectionals. According to Maestro Tinkham, “experience has been the most important thing by far because conductors have to guess or assume what parts musicians would have trouble with.”

Life may be very different now, but different is not always a bad thing. Ms. Valdez shared that even over Zoom, conductors can still build relationships as students engage and ask questions. Additionally, CYSO students have had the opportunity to work with coaches and clinicians from all over the world that we wouldn’t have had the opportunity to work with during live rehearsals. Zoom can connect students to alumni from across the country and musicians from around the world, which is an important silver lining in these difficult times.

In December, CYSO ensembles put on very impressive virtual performance that were put together by the talented sound engineer Christopher Bill, with help from our very own conductors. Conductors selected pieces that they were familiar with and that would fit each ensembles’ unique sounds. Musicians received a click track of a full orchestra performing the music that we listened to with earbuds and played along to. The click track ensured that even though we were not following a live conductor, we would still be playing together. According to Mr. Bill—who is a respected musician himself—because the director isn’t there to shape the musicians’ phrasing and articulation, it’s completely up to the musician to make those decisions. “The challenge is then taking all of those different interpretations and deciding which we and the creative directors like the best. It’s a strange way to make music.”

On Mr. Bill’s side of the process, the challenge is matching the tone of the video editing to the piece. If it’s a slow and melodic moment, the video should reflect that. “Those are creative visual decisions that most musicians aren’t used to making, so it often falls on me to brainstorm and come up with something that’s hopefully fun to watch,” he said. When I asked Mr. Bill to share something surprising about video editing, he talked about the amount of math involved in his job. With up to 120 performances to consolidate into a single video, he uses spreadsheets of numbers and time stamps to figure out how to line the video and audio up exactly. On the extreme side of editing, some physics is even involved in the process when the project involves moving objects on screen. Without our musically-talented sound engineer, conductors, and the behind the scenes support from the CYSO Operations staff, the creation of these videos would not have been possible.

Watching your virtual performance video for the first time is magical for the students and conductors alike. Mr. Gray said that when he helped put the Philharmonic Orchestra video together, he was pleasantly surprised by how his orchestra sounded. After all, that was the first time all year that he had heard the orchestra actually play together. Ms. Valdez shared that different kinds of risks were taken throughout the entire process of putting the performances together—Conductors had to trust that their students were doing their part and practicing, and students had to trust that their conductors would put the best face on their hard work. In the end, watching the final product was a proud moment for all of the conductors.

My own family was awed by all the incredible work done by the musicians and those who put the videos together. My mom watched the Symphony Orchestra video performance at least 200 times and still teared up at the ending each time. My dad and grandparents would excitedly point me out and take screenshots when I showed up on the screen. I was glad that I got to share the magic of music with my family in some form. It was the next best thing to packing up after a concert and finding my proud parents in the lobby of the Fine Arts Building. 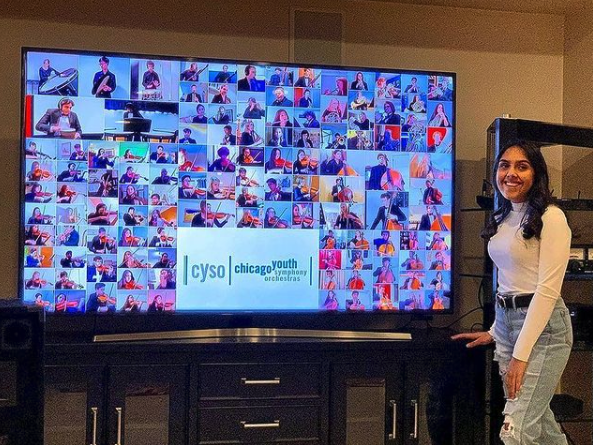 Jonathan Alday, also a violinist in Symphony Orchestra, said, “My entire family was blown away by how well organized, synchronized, and put together it was. Watching the performance was a much-needed reminder of what my hours of practicing were put into!” Concert Orchestra oboist Brielle Dukovac, who joined CYSO for the first time this season shared, “Even though my standards were quite high, they were still surpassed with how neatly the videos were put together. The audio was so crisp and clear; it was almost like it was a recording of a live performance! My family felt the same way. It was so rewarding to finally see everyone’s hard work and dedication come together into one big performance.”

Given the circumstances, it is commendable that CYSO still found a way for students to share music with their loved ones. I look forward to the day we can make music in person again. Until then, I’m thankful that we have found alternate ways of keeping music alive.