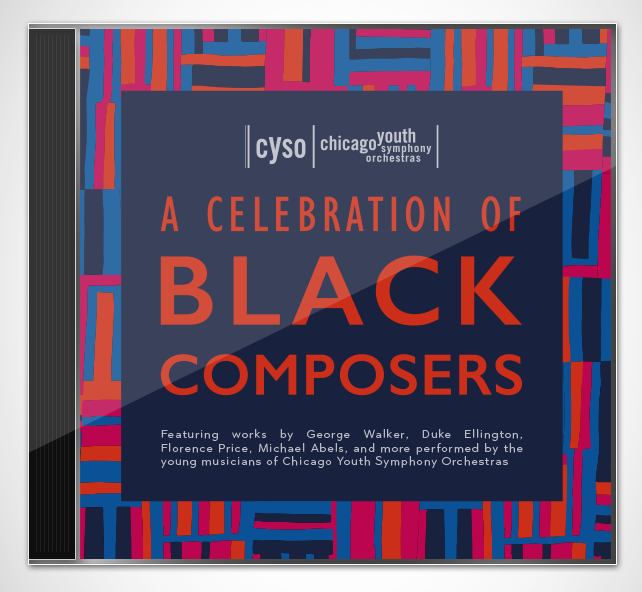 In honor of Black History Month, CYSO is excited to release a new album, “A Celebration of Black Composers.” The CD includes performances recorded over the past three seasons and is the first album CYSO has produced that features each of our high school level ensembles. The album highlights works by Black composers from across the spectrum, from Duke Ellington to George Walker, Florence Price to Michael Abels. We were excited to put together this collection in order to shine light on composers whose works often didn’t get the attention they deserved during their lifetimes, as well as those who are producing important works today.
$10 from the sale of each album will go to support the Chicago Musical Pathways Initiative. CMPI supports young Chicago-area musicians from backgrounds that are historically under-represented in the classical music world, including Black and Latinx students, among others. CYSO is a proud steering team member of CMPI, which launched in 2019.

The album features contemporary works from Michael Abels, best known for his work composing for the Jordan Peele films Get Out and Us. We’re thrilled to feature the world premiere recording of Abels’ Winged Creatures performed by CYSO alums Anthony and Demarre McGill with our Symphony Orchestra under the baton of Maestro Tinkham. The piece was commissioned by Cedille Records and the recording appears courtesy of them as well. Cedille released the album Winged Creatures featuring the McGills with CYSO in 2019. Philharmonic Orchestra’s performance of Abels’ Global Warming is also featured.
Jazz greats Duke Ellington and Slide Hampton are featured prominently on the album. The first ever release of recordings of Hampton’s Venus & Serena and Nelson Mandela are included, pieces from a series written in honor some of the most influential Black figures in history. Members of Jazz Orchestra also joined forces with Symphony Orchestra for Ellington’s Grand Slam Jam, the first known recording of the rarely performed piece, originally entitled Nonviolent Integration, a clever nod to the melding of jazz big band and classical orchestra.
The album also features works by celebrated composer George Walker, whose Lyric for Strings was performed by Philharmonic Orchestra last fall, alongside Address for Orchestra, from Symphony Orchestra’s Spring 2019 concert at Orchestra Hall. Concert Orchestra’s recording of Florence Price’s Symphony no. 1 is also included. Price was a Chicagoan composer and the first African-American woman to have her music performed by a major symphony orchestra when the CSO premiered the piece in 1933. Accelerando Strings’s performed Danza de Panama from Harlem Renaissance composer William Grant Still, a piece based on folk tunes from the Central American country.
Our steel orchestras are represented by Junior and Kaiso Steel Orchestras. Junior Steel performed a medley of Oh Freedom, the traditional Black spiritual, and the Civil Rights anthem We Shall Overcome. Kaiso Steel Orchestra contributed Lift Ev’ry Voice and Sing, known as the “Black National Anthem.” Both pieces were recorded at the December 2018 Steel Orchestras concert.
“A Celebration of Black Composers” is available now in the CYSO shop!