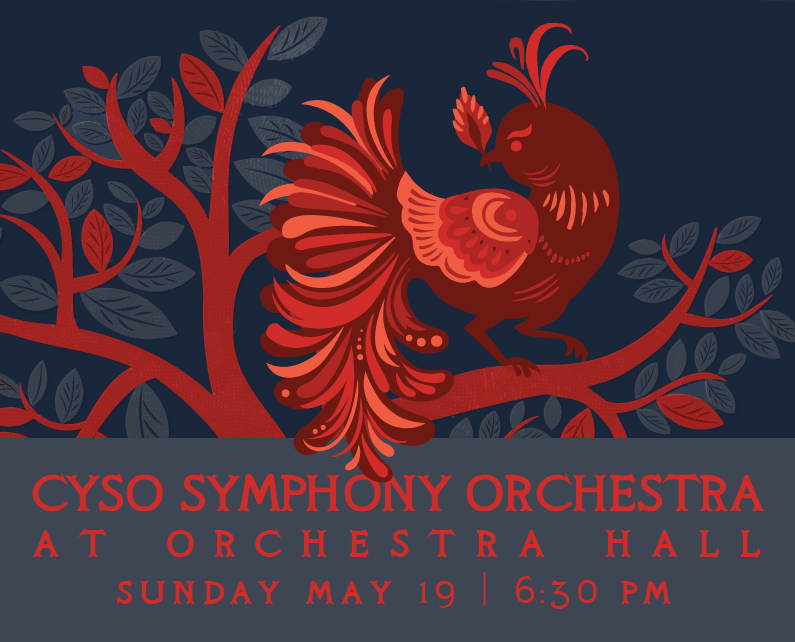 Symphony Orchestra will present their spring concert at Orchestra Hall on Sunday, May 19 at 6:30 pm. Under the baton of Music Director Allen Tinkham, the concert features works by Stravinsky, Sibelius, Thomas and Copland, along with a performance from CYSO’s Philharmonic Orchestra.
The centerpiece of the program is Igor Stravinsky’s 1919 The Firebird Suite. The piece, which made the composer an overnight sensation, weaves together elegant classicalism and raw modernism. Based on Russian folk legends, it tells the story of a magical firebird that grants protection to a brave prince through the use of a magical feather.


The concert will feature the conducting debut of 17-year-old Alexander Carroll, a bassist in Symphony Orchestra and recipient of CYSO’s 2018 Doug & Sharon Carroll Conducting Fellowship (no relation). Alexander Carroll, who is a senior at St. Charles East High School, will conduct his peers in Aaron Copland’s Hoe-Down from the 1942 ballet Rodeo.
The concert will also feature two works by Jean Sibelius. His Symphony no. 7, composed in 1924, shifts dramatically between light and shadow, conveying a brooding mood. The piece was an experiment Sibelius undertook to compose a symphony in one continuous movement. In the second Sibelius work, 18-year-old Symphony Orchestra co-concertmaster Rabia Brooke performs his Violin Concerto in D minor. Brooke was the winner of CYSO Symphony Orchestra’s 2018 Concerto Competition and will attend Julliard next year.
CYSO’s Philharmonic Orchestra will also open the concert with Glinka’s Ruslan and Lyudmila Overture, under the director of Associate Conductor Terrance Malone Gray.
Representatives from the Illinois Council of Orchestras will be on hand at the concert to present the Conductor of the Year award to Music Director Allen Tinkham. Last season, Maestro Tinkham led Symphony Orchestra to acclaim as a featured performer at the League of American Orchestras national conference and the Illinois Music Education Conference (IMEC), as well as the ensemble’s performance for Edgard Varèse’s Ameriques, the first ever by a youth orchestra. Tinkham also recorded the album Winged Creatures with Anthony and Demarre McGill and Symphony Orchestra, to be released this month on Cedille Records.

CYSO will also honor violin instructor Jennifer Capelli with the Music Inspiration Award. Nominated by three of her students who perform with CYSO, Cappelli is a member of the Grant Park Symphony and has performed with the St. Louis, Milwaukee, and Chicago symphonies. Her students have continued on to the Juilliard, Yale, and Indiana University schools of music and hold positions in major orchestras throughout the country.

Tickets for the May 19 concert will be on sale online until Friday, May 17 at noon, and then at the door on Sunday. See you there!