CYSO is pleased to announce that Rafael Noriega has been recognized by the City of Chicago as a member of the 2019 Rising Star Honor Roll. 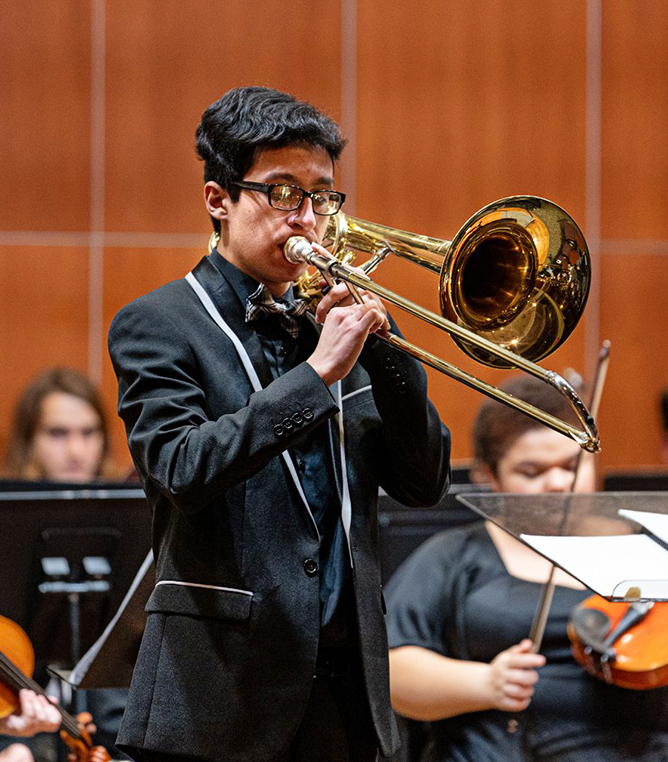 The city of Chicago honored Rafael among a highly-selective group of young Chicagoans who have enriched the city through music, theatre, dance, visual arts, media arts, and literary arts. CYSO nominated Rafael in recognition of his passion for music and the city of Chicago. This prestigious award was presented by Mayor Lori Lightfoot and the Department of Cultural Affairs and Special Events (DCASE) .
Rafael began playing the trombone in third grade, and has been a member of CYSO for the past three years, beginning in Philharmonic Orchestra and for the past two years, as a member of Symphony Orchestra. Rafael was also a member of Chicago Musical Pathways first cohort of musicians. He’s received acclaim as a musician, including winning From the Top’s Jack Kent Cooke Young Artist Award in 2018 and the 2019 winner of Merit School of Music’s concerto competition. This past summer, Rafael was a member of NYO, the National Youth Orchestra of the United States, and also participated in NYO2 during summer 2019.


In addition to his dedication as a performer, Rafael is also committed to inspiring a passion for music in others as well. He has volunteered at his former elementary school, Gallistel Language Academy, where he entertained students and led activities such as guitar classes, cooking, sports, and other programs. He’s also an inspiration to his siblings; his younger sister has began learning the trumpet, and like Rafael, plans on auditioning for CYSO.

Through his music career, Rafael has “built lifetime friendships with people that share the same love and passion for music as I do.” He uses music as a way to connect with his peers and cheer someone up who’s having a rough day.
Rafael sees music continuing to play a huge role in his future. He hopes to someday play in a professional orchestra, and to continue motivating those in his community that wish to pursue music.
We’re honored to have Rafael as a member of CYSO, and are proud of the contributions he’s made not only to our orchestras, but to the entire city of Chicago.