Among the pieces played by CYSO’s Symphony Orchestra at our November 14th Orchestra Hall concert was the midwest premiere of Vivian Fung’s Trumpet Concerto. The concerto, written for CYSO alum Mary Elizabeth Bowden, is an exciting and dynamic work that builds upon Fung’s status as “one of today’s most eclectic composers” (NPR). Fung was born in Edmonton, Canada, studied with composers Violet Archer, David Diamond, and Robert Beaser, and received her doctorate from Juilliard. She is the winner of numerous honors like the JUNO Award, a Simon Guggenheim Foundation Fellowship, and the New York Foundation for the Arts’ Gregory Millard Fellowship and has had her compositions performed by The Chicago Sinfonietta, the St. Paul Chamber Orchestra, the Montreal Symphony, and the Jasper Quartet, to name a few. Today, Fung continues to work with ensembles from around the world, mentors young composers in youth music programs, and is currently on the composition faculty at Santa Clara University.

Tom Gotsch, CYSO Social Media Team member, Composition Seminar student, and bassist in the Symphony and Jazz Orchestras, recently spoke with Vivian Fung about the trumpet concerto, as well as her experiences as a composer. The following is an excerpt of that interview, lightly edited for length and clarity.

How did you get into composition?

It goes back to when I was seven or eight and I started composing because I did not want to practice. I started on the piano, but because I didn’t like practicing, I’d start improvising, daydreaming, and coming up with songs. My first piano teacher saw that I was doing that and instead of reprimanding me, she actually taught me how to notate, or how to put my songs onto paper. It became a huge outlet for me when I was a teenager.

What was the inspiration for the trumpet concerto?

Mary Elizabeth Bowden actually approached me about composing a piece for her to play. She came to my house and we got talking. She talked about the challenges of becoming a full time soloist and being female in the field. I really felt the connection there and I decided to put all of those things into the concert. But at the same time, there’s a lot of joy as well. There are a lot of parts where you have a groove and a lot of rhythm and that’s part of my style. I wanted it to be one movement because I didn’t really want a break in the flow of the piece and so it’s one continuous movement but there are many different sections to reflect  the different colors of the trumpet. Mary demonstrated on her different instruments and we decided on the E-flat trumpet as well as the flugelhorn, which she switches to in the middle of the piece. The flugelhorn has this really wonderful mellow and soulful quality. We wanted to highlight the different colors of the trumpet and that became part of the inspiration for the piece.

What was your experience as a female composer in a predominantly male field? Has it informed this piece, like your conversation with Ms. Bowden?

A lot is changing but I really wanted to compose a powerful piece, something that really made an impression, virtuosic and fast paced. I also wanted it to represent all the shifting qualities of emotion.

How has the piece changed from when you first wrote it?

Mary said that she wanted the piece to be challenging and virtuosic, so I did [that]. But it got to the point where it became a bit too much and we worked together to scale it back for her. I originally had her on the low trumpet at the end but I decided that it didn’t have the gravitas that I wanted and didn’t pack a punch so I changed the instrumentation back to the E-flat [trumpet] in the end. In terms of the architecture of it, the beginning motif serves as a connection, the intervals are woven and the way that she plays the opening comes back at different intervals. I think that it sets all these pillars in the piece.

Did you originally think about the piece being played by young people? If so, did it influence your writing or perception of it?

When we were talking, we were still in the midst of gathering who was going to be part of the consortium. I knew that CYSO was interested from Mary talking about her experience in this orchestra. I don’t think I made it easier because it was going to be played by a youth orchestra. I think in some regard, because it was written at this time, younger people may get it faster because of the way that the rhythms are crafted. There’s a hip-hop-y section and that groove is more palpable to this generation.

Was your listening experience with the professional orchestra different from that of the youth orchestra?

I was really impressed by all of you [at CYSO] as far as the sound you created. Also by the fact that you all were working together and having all your attention on and following the conductor. You were all really on the beat!

Would you say that the rhythmic aspects, aside from the intervallic stuff, are the main aspects of the piece?

A lot of my music has a lot of drive to it. It’s very visceral and I like to have it be felt. The rhythm just kicks in and stays there, it keeps the adrenaline pumping.

Any comments for listeners hearing the piece for the first time?

In addition to a very prominent trumpet part, there’s also a lot of other colors going on that really shape the trumpet playing. [The orchestra] is not like an accompanist, it’s more like a collaborator. It’s definitely contributing to and enhancing all the colors.

Are there any experiences that you’ve had writing this piece—interacting with Miss Bowden, or listening to all the different renditions of it—that you think you’ll take with you into future compositions?

Do you have any advice for younger composers?

If you’re interested in pursuing composition, two things are important. One is to really study and learn the craft of composing, but also secondly, it should be a calling. For me, it’s sort of like [composing] chose me. It’s not your typical 9 to 5 job. It’s something that is very fulfilling, but it’s also has to come from within you and you have to trust those instincts.

Thank you to Vivian Fung for this insightful interview! Listen to more of her work on Ms. Fung’s website.

Concerto for Trumpet was performed by Mary Elizabeth Bowden and CYSO’s Symphony Orchestra at our November 14, 2021 concert at Orchestra Hall. You can purchase DVDs and audio recordings of the performance or watch the livestream of the concert.

Special thanks to Social Media Team members Abigail AuYeung for transcription help and Alyssa Shih for photographing the interview. 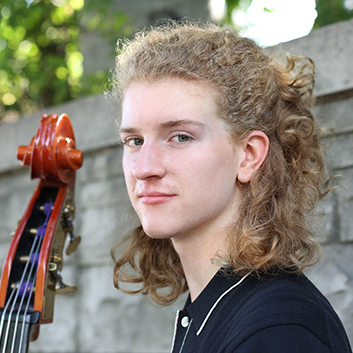 Tom Gotsch is a bassist in CYSO’s Symphony and Jazz Orchestras, a student in the Composition Seminar, and a member of the CYSO Social Media Team. He is a senior at Jones College Prep in Chicago. Outside of music, Tom enjoys reading, drinking tea, and researching trees and evolutionary biology.