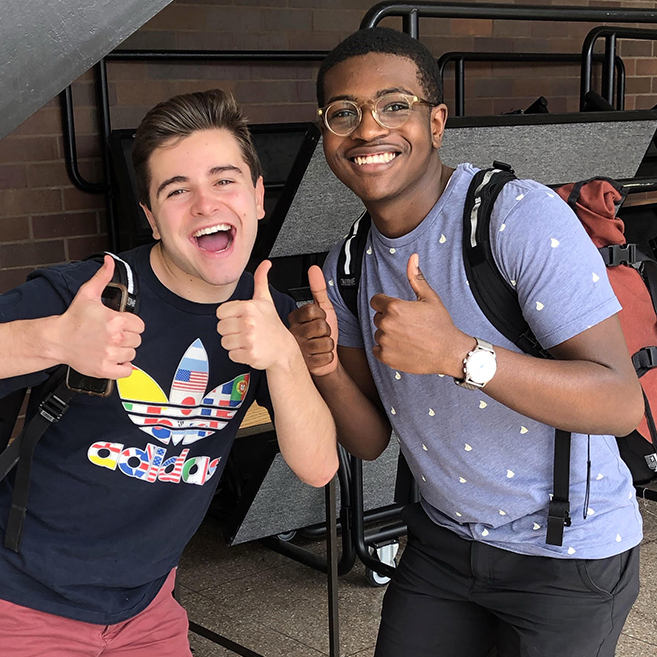 Evan McMahon is a violinist in CYSO’s Concert Orchestra and junior at Whitney M. Young Magnet High School who also plays in the Whitney Young Chamber Orchestra. In addition to his busy schedule as a musician and keeping up with school work, Evan gives back to the community by spending time each week volunteering with a number of different organizations working in the community.
CYSO Social Media Team member Keith Calloway plays alongside Evan in Concert Orchestra and at Whitney Young, (where both ensembles are under the direction of conductor Michael Mascari!). Keith recently talked with Evan about what’s drawn him to volunteer work, how playing music has helped teach him learn resiliency, and how Evan balances his very full schedule!

Keith: When did you first start playing the violin and what motivated you to start?
Evan: I started playing the violin when I was in first grade–I think I was 6. There was a violinist who came in to one of our assemblies at school and played classical music on an electric violin and I was super in awe of everything that she was doing. I asked my parents if I could take lessons, and at first, they were like “No, it’s expensive, and you’re not even going to like it,” but then I ended up really liking it, and this is where I have been ever since.

Have you had the chance to play an electric violin?
Yes, I have! I actually own one. Sometimes my brother and sister and I have a little band where I’ll play the electric violin, my sister plays the piano or guitar, and my brother just does his own thing.

How long have you been in CYSO?
I’ve been in CYSO for five years. I started in Debut Orchestra and was there for a couple years, and then I moved to Accelerando Strings. Now I am in Concert Orchestra.

What led you to audition for CYSO?
I went to a Suzuki violin camp and we did an orchestra class that I really liked. I wanted to be in an orchestra more often—not just in the summer—so I asked about youth orchestras and they recommended CYSO. I was initially waitlisted after that audition, but I ended up getting in!


I think music has prepared me well for facing challenges and facing rejections, because they’re just a part of life. I value my best effort rather than being compared to other people.

What else are you involved with outside of orchestra and playing the violin?
I coach gymnastics, and I was a competitive gymnast for my whole life until this year because it was getting to be too much. I teach English as a Second Language classes around Chicago to mostly Spanish-speaking immigrants because I really like Spanish and it’s a really good way to get involved. In school, I’m a part of Best Buddies, which is an organization that fosters friendship between people with and without disabilities. On the weekends, I volunteer at Misericordia, which is a home for people with disabilities. I’m also on the Whitney Young sailing team, and I’m in a bunch of clubs at school.

It seems like a lot of what you do involves teaching people or volunteering your time. What value do these experiences add to your life?
I really like learning about other people’s backgrounds and I really enjoy being culturally aware. I also really try to be inclusive of everyone because I have been excluded before and I know that it does not feel great. It’s one of my passions to work on inclusion, whether it be including people with disabilities or including people who don’t speak English in order to allow them to be a part of our larger Chicago community. Creating an environment where everyone is included is one of my life goals.

You’re obviously very involved and participate in many different types of activities. Have any of the skills that you developed from playing violin or playing in an orchestra translated into other areas of your life, or vice versa?
I think music has prepared me well for facing challenges and facing rejections, because they’re just a part of life—like auditioning and not getting the spot you wanted, or doing a seating audition and being placed farther back than you would like. These skills helped me a lot with competing in gymnastics because they helped me not get too caught up in being disappointed if I didn’t place how I wanted or if I didn’t go to nationals, etc. It allowed me to focus on the aspects of the sport that I liked. This translates a lot to my life because I value my best effort rather than being compared to other people.

We both play under Mr. Mascari at school and at CYSO in Concert Orchestra. How does it compare to see Mr. Mascari at CYSO as opposed to school orchestra?
It’s really interesting because sometimes he’s very similar throughout the week and other times he’s very contrasting in terms of what we’re doing in orchestra in school every day versus what we’re doing here [at CYSO]. It makes me laugh sometimes hearing some of the same things that he told us throughout the entire week at school. He’s an awesome conductor and I’m really happy that I get to work with him 6 days a week.

How does your experience in Concert Orchestra differ from your experience in the Whitney Young Orchestra?
Orchestra at Whitney Young is pretty similar, except for that we don’t have wind and brass, but it’s very similar in that there are so many good players. In CYSO, there is a little greater sense of professionalism from the students–which I like because I do not always get that at school–so it’s nice to have the contrast.


If you could be anyone for a day, who would you be and why?
Wow, that is a toughie! I’d really like to be a person who works for an aid organization, who travels around helping communities. I think that would be really cool because it combines my passion for interactions with my passion for Spanish and other languages. Last summer, I went to Spain and lived with a host family, and it was such a fun experience. I was culturally immersed and being able to experience the culture of another place was super enriching and to be able to include that in my career would be ideal.


In CYSO, there is a little greater sense of professionalism from the students–which I like because I do not always get that at school–so it’s nice to have the contrast.

What’s something cool or a quirk about you that you think people should know?
I always say that I grew up in a children’s circus. It was just a local [circus program] in Chicago, but we would perform at different places around the city. I once performed at the Museum of Science and Industry, which was pretty cool, and we also did a little tour around Illinois. This was a super diverse group and I liked being a part of this community because there were so many different people and it helped me better understand and appreciate the backgrounds of others. 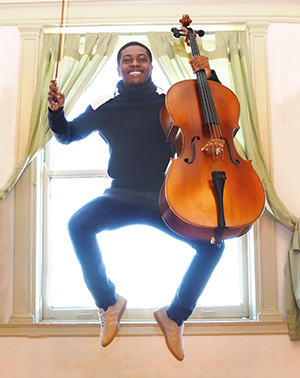 Keith Calloway is a cellist in CYSO's Concert Orchestra and plays Double Seconds in Kaiso Steel Orchestra. He is a senior at Whitney Young High School in Chicago and also plays cello in the Whitney Young Chamber Orchestra. Some of Keith's extracurriculars include being an editor for the school yearbook and sailing on the sailing team. In his free time, you can find Keith catching up on Netflix shows or traveling around the city to take pictures.