Are you a classical musician who’s wanted to listen to more jazz, but don’t know where to start? Few CYSO students are perhaps more qualified to help than Tom Gotsch, bassist in both Symphony and Jazz Orchestras and a member of our Social Media Team. Tom put together this listening guide to help newbies and casual listeners learn to appreciate the truly American art form that is jazz music.

April is Jazz Appreciation Month! For jazz lovers, this is a month filled with the familiar sounds of Bebop, Modal, Hard Bop, Fusion, Latin, Avant-garde, Big Band, and tons of other styles. But for those who may not listen to jazz on a regular basis, the genre may feel a bit daunting. There’s just so much music out there, you may not know where to start! To help, we’ve put together this list of some of the most important jazz albums of all time to give you a starting point as you begin your jazz explorations.

Before we begin, a note of clarification. This is not meant to be a ranking of the “best jazz albums of all time,” nor is it an extensive list of all the important musicians who contributed to jazz music. This list, as with all lists that describe important artistic works, should be taken with a grain of salt —there are surely important musicians who are not represented here, simply because of space restraints in a single blog post! This list is intended to be only an introduction to the incredibly vast world that is music from the jazz tradition, informed by my own personal tastes, of course, and albums that have received either critics’ glowing reviews or hugely popular reception at their releases (or some combination of the two). Enjoy!

To our audience of current jazz listeners, this album’s presence on the list should be no surprise. It’s widely regarded as not only one of the most important jazz albums of all time, but also one of the most influential albums of music period. Kind of Blue is a compositional masterpiece credited with inspiring artists and albums of musical traditions from rock to classical, and heralding the beginning of the Modal jazz movement. Recorded and produced within the “Hard Bop” era alongside contemporaries like Art Blakey and the Jazz Messengers, the album features an impressive group of all-stars: trumpeter Miles Davis, saxophonists John Coltrane and Cannonball Adderley, pianists Bill Evans and Wynton Kelly, bassist Paul Chambers, and drummer Jimmy Cobb. With this kind of lineup, and that kind of widespread musical impact, combined with so much significance in jazz history, this album is hard to beat.

Featuring two of the most famous jazz musicians, this album is a significant one. Fitzgerald and Armstrong undoubtedly have different styles of singing, but their tones blend together in a beautiful, heart-moving duet on tracks like “Can’t We Be Friends?” and “Moonlight in Vermont.” But the pair aren’t the only notable musicians on the record, as they’re accompanied by the legendary Oscar Peterson quartet, featuring pianist Oscar Peterson, bassist Ray Brown, drummer Buddy Rich, and guitarist Herb Ellis. With these personnel contributing to the album, the music is uniquely dynamic.

If you’re trying to find a straight-ahead, swinging, iconic album of the Hard Bop era in jazz history, it’s hard to find something better than Moanin’. The Jazz Messengers was a combo that lasted for 35 years, and had musicians like Mulgrew Miller, Woody Shaw, Reggie Workman, Kenny Garrett, Benny Green, among dozens of other influential artists cycling in and out of its ranks under the leadership of drummer Art Blakey. Needless to say, it’s easily one of the most influential long-standing ensembles in jazz history, and this album has certainly stood the test of time as well. It features Blakey alongside trumpeter Lee Morgan, saxophonist Benny Golson, pianist Bobby Timmons, and bassist Jymie Merritt.

Released around the same time as Art Blakey’s and Miles Davis’ albums on this list, Blue Train features one of the most important saxophonists of all time. Coltrane’s sound, compositions, and virtuosity revolutionized the saxophone’s role, heralding a new sound, and introducing new textures to jazz. Blue Train features some of Coltrane’s first expeditions into this new sound, which involved more arpeggiations, dense harmony, and a more fluid pulse with regard to the rhythmic feeling of the music. With personnel like trumpeter Lee Morgan (who makes a few appearances on this list), trombonist Curtis Fuller, pianist Kenny Drew, bassist Paul Chambers, and drummer Philly Joe Jones, this album is uniquely brilliant.

Charles Mingus has a sound unmistakably his own. Arguably one of the most important bassists, as well as one of the most influential composers in jazz history, Mingus was a key musician of the Bebop era, playing with other icons like Charlie Parker, Thelonious Monk, Dizzy Gillespie, Bud Powell, and Max Roach. But Mingus’ unique blend of musical influences, from New Orleans jazz, to western classical, to gospel, in combination with his sheer musical genius, set him apart as one of the most influential composers of the avant-garde as well. Let My Children Hear Music is, as Mingus himself once said, “the best album I have ever made,” and features 7 unique and phenomenal compositions featuring a jazz orchestra.

Considered one of the most important musicians in the Spiritual Jazz movement, Alice Coltrane was a brilliant and under-appreciated pianist, composer, and harpist who was influenced by both the jazz and Western classical musical traditions. Coltrane wrote and recorded Journey in Satchidananda when she was first seeking Hindu spiritual guidance from the guru Swami Satchidananda, and in her compositions blends influences from Indian Classical music, North African music, and the jazz tradition to create what is referred to as a “remarkable album, and necessary for anyone interested in the development of modal and experimental jazz” (Allmusic).

Speak No Evil has been described as “a consolidation of Wayne Shorter’s compositional excellence…thorough and consistent and wide-ranging… a manifesto for his ideas” (Horwitz, NPR). And since it’s Wayne Shorter, you know those ideas are going to be spectacular. The saxophonist, a member of the Jazz Messengers, Miles Davis’ second quintet (which Davis created a few years after Kind of Blue), and later the fusion band Weather Report, is one of the most important and innovative composers in jazz history. This album showcases a number of Shorter’s most famous compositions, like “Wild Flower,” “Infant Eyes,” and the title track “Speak No Evil.” (It’s also one of the favorite albums of the person writing this.)

We’d surely anger most, if not all, trumpeters if we didn’t include Lee Morgan on this list, and with good reason. Morgan, a former member of the ubiquitous Jazz Messengers, only lived to 33, but his legacy as a virtuosic, blazing, soulful horn player has inspired generations of jazz musicians. The Sidewinder showcases Morgan’s brilliant artistic abilities alongside a combo including all-stars like Joe Henderson, Barry Harris, Bob Cranshaw, and Billy Higgins. No wonder it’s one of Blue Note’s (the famous jazz record label and club) most famous, best-selling, and top-rated albums.

There you have it! If you’re just taking the first few steps towards falling in love with jazz, you can’t go wrong with these 8 albums. Wondering what to do once you’ve listened to them? Simple! Listen to other albums by the same musician! Better yet, listen to the sidemen on the record! For example, if you liked Kind of Blue, why not check out a few albums by John Coltrane, Paul Chambers, or Bill Evans? If you couldn’t stop tapping your foot to the Jazz Messengers, why not listen to Bobby Timmons or Benny Golson?

It’s also worth noting that music from the jazz tradition didn’t just exist in the 50’s and 60’s. Jazz is still alive today, too! If you want to really dig into this music during Jazz Appreciation Month (and hopefully beyond), check out some contemporary artists responsible for worlds of new, incredible music! Esperanza Spalding, ARTEMIS, Brian Blade, Wynton Marsalis, Christian McBride, Robert Glasper, Brad Mehldau, Kamasi Washington, Cécile McLorain Salvant, Shabaka Hutchings, Kurt Rosenwinkel, Christian Scott aTunde Adjuah, Makaya McCraven, and Chicago’s own Marquis Hill and Joel Ross (among many, many others) are all creating incredibly beautiful and exciting new music! After all, if we want to appreciate music from the jazz tradition, we need to support the musicians who are keeping that tradition alive today. 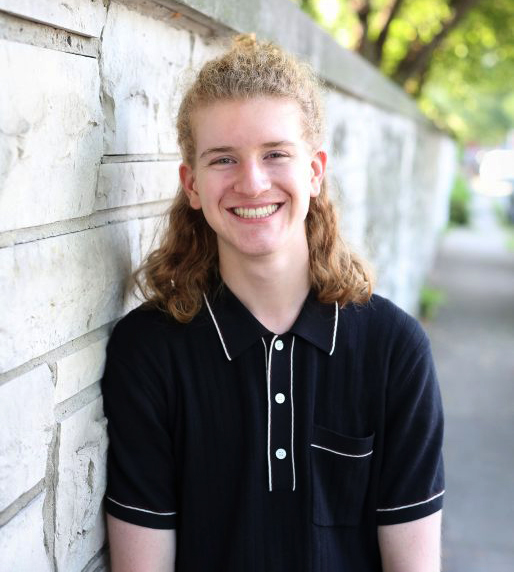 Tom Gotsch is a bassist in the CYSO Jazz Orchestra and Symphony Orchestra, as well as a student composer in CYSO’s composition seminar. He is a senior at Jones College Prep high school in Chicago, and in his free time likes to read, drink tea, and go on walks looking for old trees.