Kicking Off a New Season in the Park 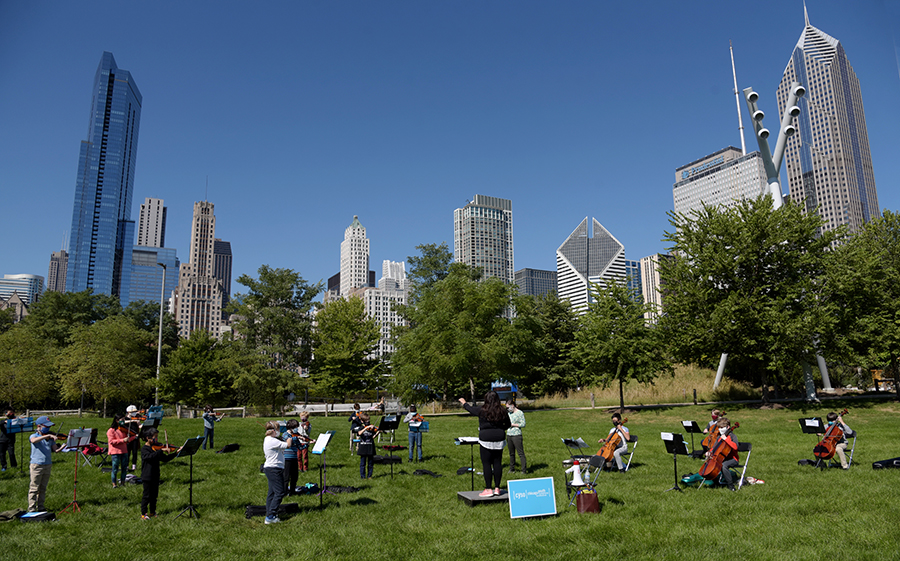 Photos above by Ed Spinelli

Under beautifully clear September skies, CYSO ensembles gathered over the past two weekends for a series of outdoor rehearsals to kick-off the 2020-2021 season. In small, socially-distanced groups, students from Overture Strings all the way up to Symphony Orchestra slathered on some sunscreen, grabbed their masks, and came to play music together for the first time since March.

Philharmonic Orchestra was first on Sunday, September 13. Gathering at Maggie Daley park downtown, Maestro Gray was heard shouting cues over a bullhorn. Music Director Allen Tinkham served as “outfield conductor” for those in the back of the ensemble and said that the excitement was palpable as students gathered. “I’ve never seen such rapt attention on the conductor from any group of musicians,” Maestro said. “They were just thrilled to be playing together again.” 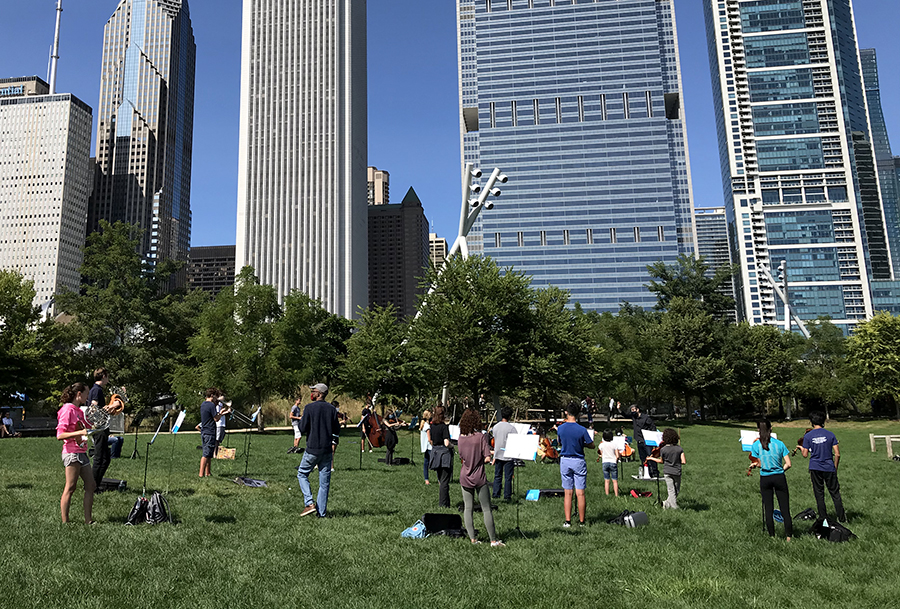 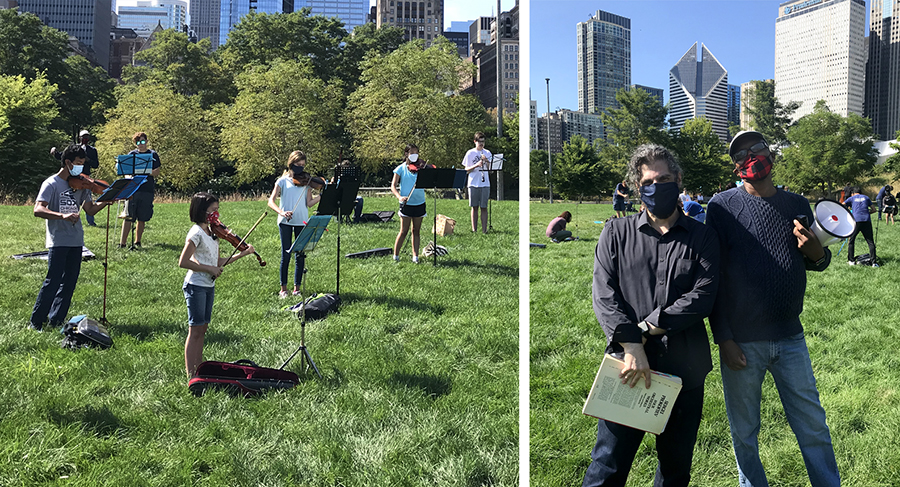 “It was so great to see my friends and enjoy making music in person again,” said Philharmonic Orchestra’s Bennett King. “Even though things are different, our music will continue.”

On Saturday, September 19, Maggie Daley Park was filled once again with students from morning to afternoon as Overture Strings, Preparatory Strings, Debut Orchestra, Accelerando Strings, and Concert Orchestra gathered throughout the day in small groups to rehearse. 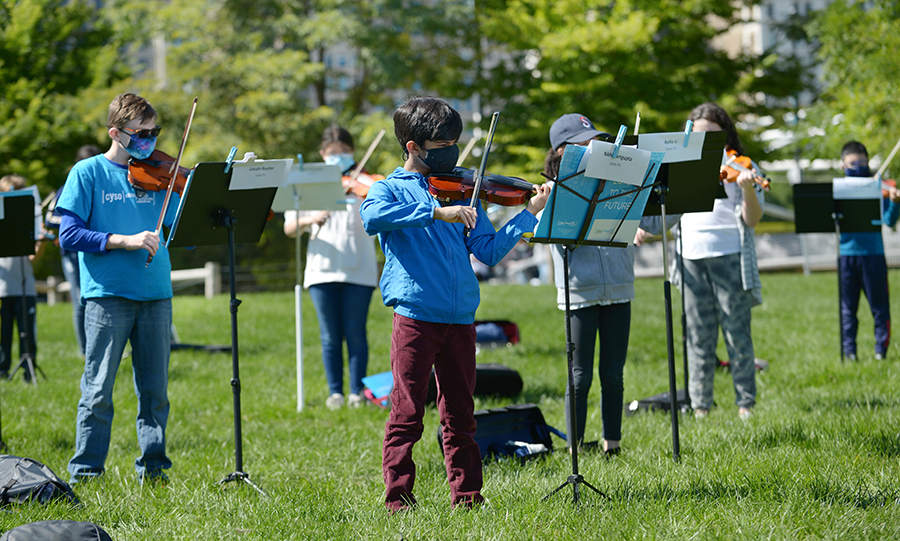 Photos above by Ed Spinelli 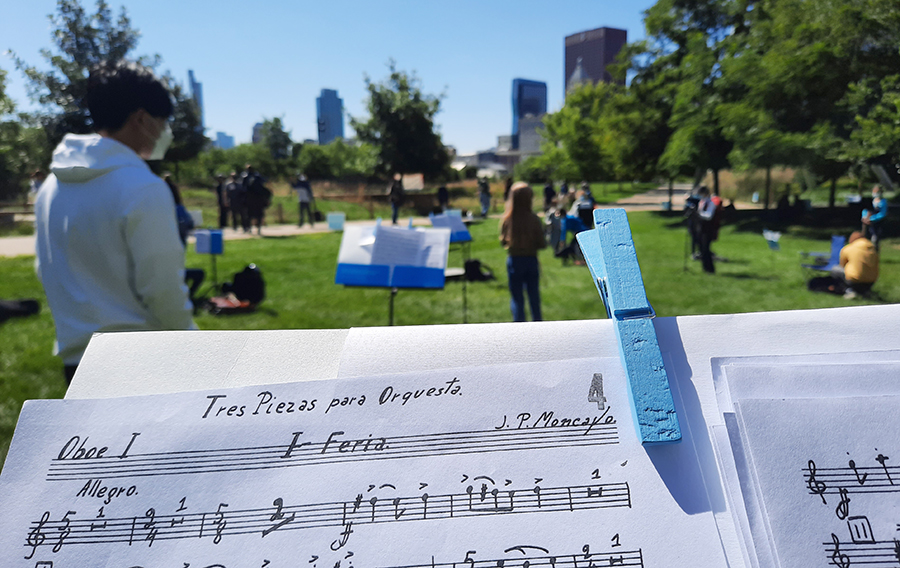 “For the six or so months that we’ve been stuck at home, I’ve only played with recordings and a metronome,” said Concert Orchestra’s Brielle Dukovac. “It felt amazing to finally play in person again, even if it was only once for an hour. What made it even cooler is that I have never played with strings before besides on recordings; it was crazy to hear what they sound like in real life.”

Also in attendance on Saturday were news crews from both WGN and ABC 7 who interviewed students as the orchestras rehearsed with Chicago’s iconic skyline in the background.

Also taking place on Saturday, Kaiso Steel Orchestra held a socially distanced rehearsal at the Fine Arts Building. It was the first time students had had the opportunity to play pans since March, so they spent time getting acclimated once again with their instruments and exploring some of the repertoire they will work on in the coming months.

This fall, Kaiso students will take home their steelpans—which usually live at the Fine Arts Building—enabling them to practice outside of rehearsal for the very first time. Director of Steel Ensembles Scott McConnell said that he is “looking forward to hearing how the ensemble grows with this access to a pan to practice on throughout the week.” 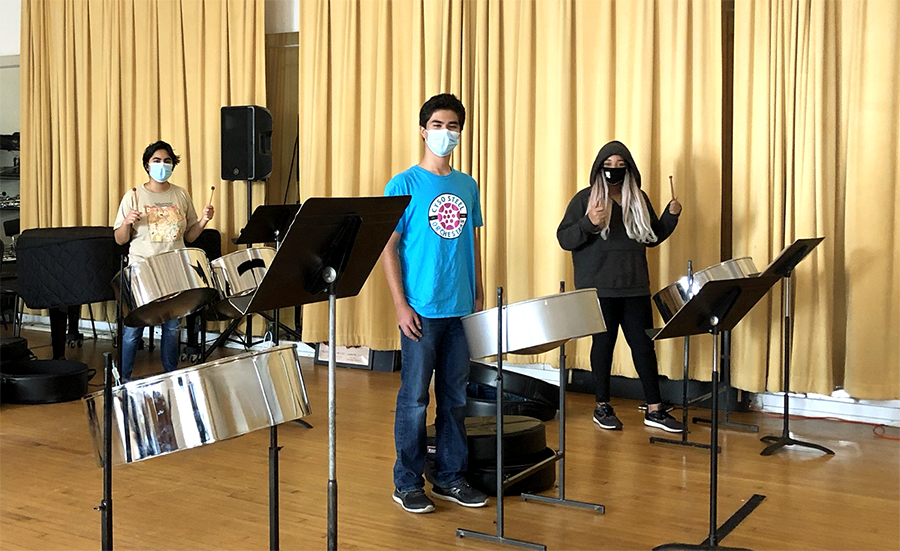 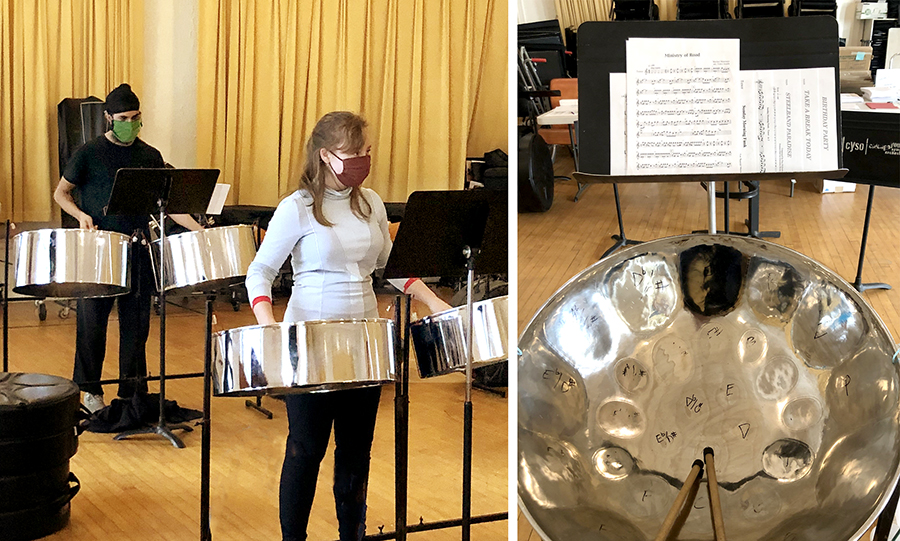 And finally on Sunday, September 20, Symphony Orchestra took over the Humboldt Park boathouse for an outdoor rehearsal that was attended by many curious onlookers. One yoga group that often uses the boathouse on Sundays moved to the yard and exercised with backing music while a little boy who stopped to listen to the performance closed his eyes and swung his arms to the beat.

Maestro Tinkham noted that playing in a busy public park came with unexpected surprises, including the wind (tamed with a few clothespins on music folders) and a mariachi band whose sound floated across the pond when the orchestra took a break. Violinist Shreya Dudeja said that “my mom said she had a lump in her throat when she heard us play because we sounded beautiful and she hadn’t seen me perform with CYSO in so long.” 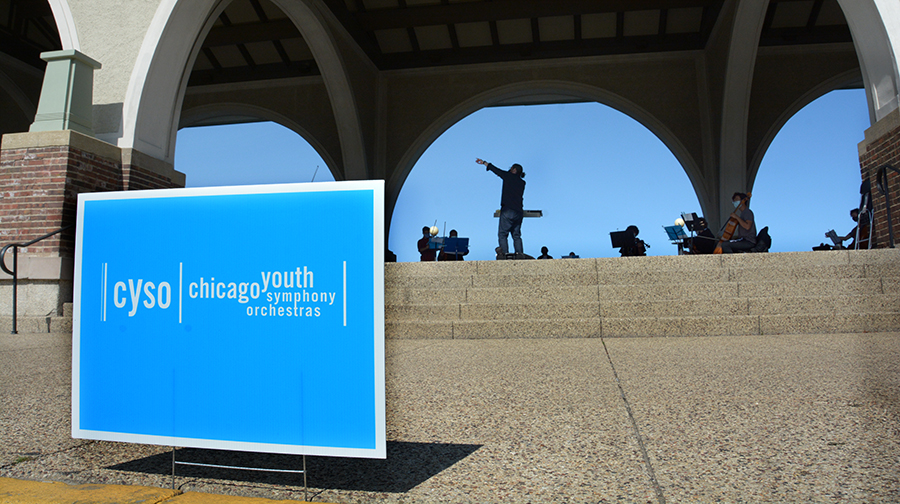 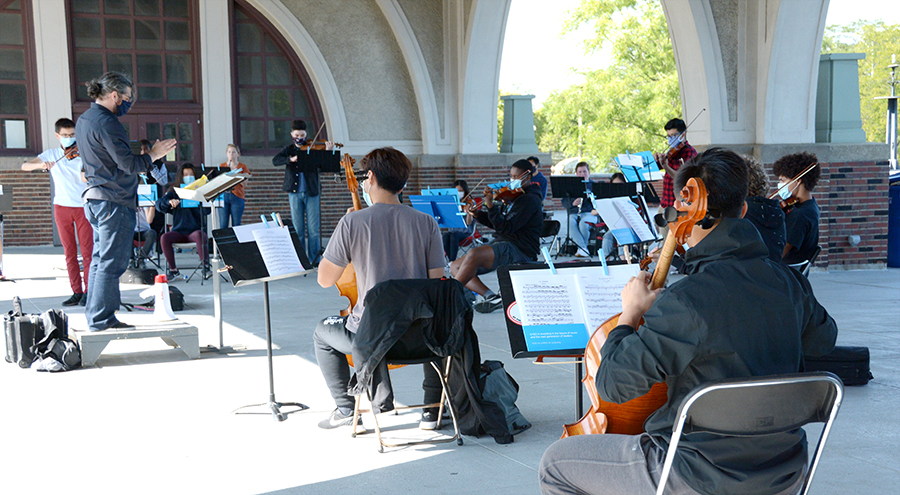 Kick-off events are still being planned for our younger steelpan players and Jazz Orchestra. And while CYSO’s fall season will continue virtually with the health of our students, families, and staff in mind, we were so grateful to be able to start off the season with such joyful in-person gatherings. We look forward to seeing everyone in online rehearsals and performances this fall and, finger crossed, in the same in-person space again soon!