CYSO is now halfway through our fall concert cycle, exploring all the possibilities of making music in the virtual world. The way we learn together has radically transformed as we gather ensembles on Zoom calls rather than in the rehearsal room. Things are different, but some things haven’t changed—students still gather together throughout the week with their conductors to learn, grow, and explore music together. We checked in with five CYSO musicians (pictures below from left to right): Symphony Orchestra flutist Anika Veda, Kaiso Steel Orchestra’s Arushi Krishnan, Symphony Orchestra violinist Alyssa Shih, Jazz Orchestra bassist Tom Gotsch, and Concert Orchestra violist Callia Murray to find out about their experiences with fall virtual rehearsals.

Alyssa Shih reflected on the experience of having the experience of normal weekly rehearsals taken away this spring and discovering that in gathering virtually, “even trying to play the same C scale through Zoom ends in chaos even a conductor can’t solve with a hard switch and pointed glare.” A new virtual fall concert cycle meant changes for CYSO staff and students alike, and new experiences and experiments for everyone.

Callia Murray remembered being nervous about her first virtual rehearsal this September as a new member of Concert Orchestra. “I was nervous about having a new conductor that I didn’t know anything about,” she said. “The first time that I heard from him it was a funny video about what to do and what not to do in rehearsal. While he was telling us these things and talking about not being on your phone, he looked at his own phone while glancing up occasionally and pretending to pay attention, just like someone would do in rehearsal. It put me at ease and made me realize that everything was going to be okay…As long as I didn’t use my phone during rehearsal!”

Virtual learning has allowed us to expand some of the music theory skill-building that we wouldn’t otherwise have time to practice during an in-person rehearsal. Symphony Orchestra’s Anika Veda said that “the past couple of weeks, I’ve learned solfege in orchestra rehearsal, and discussed various ways to practice in chamber rehearsal. During a normal year, we’d be getting straight to the repertoire, and while I miss it, I’m glad that we’re able to learn new things.”

Alyssa said that “the musicianship exercises we’ve been doing have been a huge introduction into a part of music I’d never even considered. For me, my lack of piano training has been a hole in my music education, but exercises like interval training have filled part of that.”

Anika shared how discussing an expert from The Talent Code by Daniel Coyle in Chamber Music with Dr. DeRoche has influenced her playing already. “The book illustrates the principles needed to practice effectively and efficiently, and we have been implementing these principles in rehearsal each week. I’ve also started experimenting with using this method in my daily practice, and it has been extremely helpful so far.”

Jazz Orchestra’s Tom Gotsch observed that “virtual rehearsals are, to be honest, weird—especially for jazz. Jazz is about playing in the moment and creating something spontaneous with other people. It’s about an exchange of ideas and energy, a communication between players that shifts and molds in exciting new ways. In that way, jazz is a reflection of the human experience.” During quarantine, find those connections doesn’t necessarily stop, but it did change. “When life is on pause, jazz is at risk of coming to a screeching halt, especially when you’re trying to communicate all of your ideas in your music through a screen.”

Jazz Orchestra has discovered new rhythms for rehearsal and new techniques to allow the musicians to connect with each other. Tom explained, “We start with warmups: Mr. Whitted will play one exercise and we’ll play along with him while we’re all muted, then he’ll hand the reins and a new pattern through a scale over to a student to lead next. After that, we’ll move onto the pieces we’re playing. Recently, we’ve been working on a massive Duke Ellington big band arrangement named Diminuendo and Crescendo in Blue, and we’ll play along to a recording while we’re each muted but together in our individual rooms. Sometimes we’ll split up into sections to work on different things, too: the trumpets might work on phrasing the melody in a certain way, the bassists on keeping the feel consistent and keeping a steady drive, the trombones on getting a robust sound out of their lines, and the saxophones on playing their notes with precise rhythm and lots of feeling. At the end of each day, we come back to debrief about what it is we’re playing—the history, sound, and spirit—and what we need to do before next class. (Hint: it’s usually ‘practice’).” 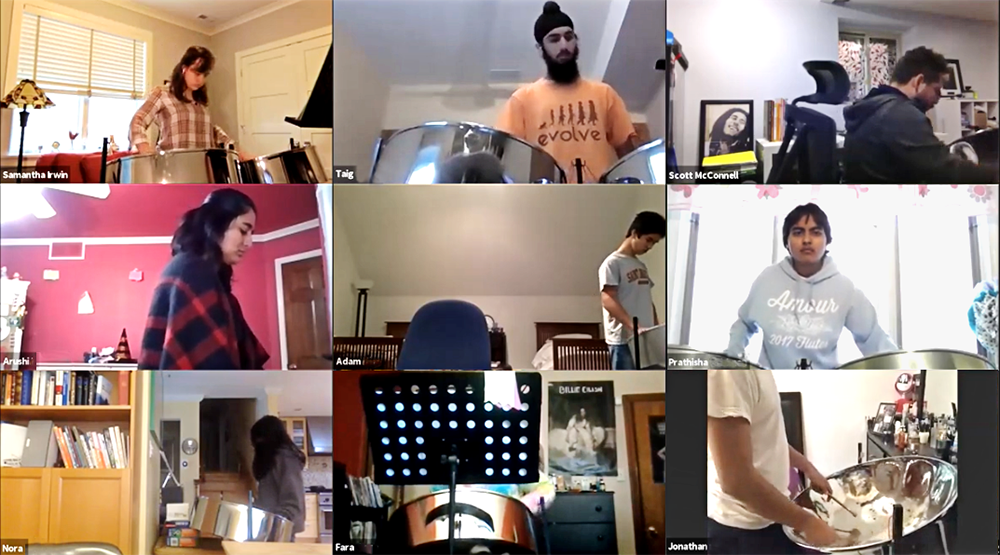 Kaiso Steel Orchestra’s Arushi Krishnan reflected on how CYSO has been a constant in her life for nearly a decade. “As the craziness that is 2020 continues to move around us, it’s nice to be able to have some sense of normalcy with CYSO. When we went virtual very quickly in the spring, it forced steel students to get creative with how we would continue to learn, since we didn’t have access to pans at home.” Students spent the spring exploring steel history and music, sometimes performing calypso numbers on violins and trumpets.

This fall, the pandemic has actually given Kaiso students an entirely new opportunity—steelpans that normally live at the Fine Arts Building have been lent out to students to take home. Arushi observed that “this has been such a blessing for us, because what we would normally only get two hours a week to play with is now at our disposal all day, everyday.”

She explained that fall rehearsals have allowed Kaiso students to “spend more time developing our technique as pan players.” Arushi shared that, “it’s been so amazing for me to see how having a steelpan at home has helped me improve! I remember our first rehearsal when Scott gave us a scale exercise to look at and I had so much trouble getting through the whole thing. Now just a month later, I’m able to easily go through that exercise like it’s no problem.”

Rehearsals this year may look different, but the constant is the dedication of our young musicians and the irreplaceable learning that happens when they gather together—even virtually. As Alyssa observed, “nothing can replace live orchestra, but we’re getting a CYSO experience even if it’s a brand new one. Orchestra carries on, and we continue to learn.”