Shreya Dudeja is Concertmaster in CYSO’s Accelerando Strings and a member of CYSO’s Social Media Team. She recently participated in the concert collaboration with ChiArts Orchestra and spoke to her fellow musicians and the two ensembles’ conductors about the project and what CYSO hopes to accomplish by bringing the two groups of young musicians together.

A few weeks back, CYSO’s Accelerando Strings partnered with the Chicago High School for the Arts (ChiArts) String Orchestra to put on a remarkable community concert.  The collaborative concerts are now in their third year, and as a violinist of Accelerando Strings who got to experience this partnership last year as well, I feel that the experience was even more memorable this year. I spoke with Daniella Valdez, Director of String Ensembles at CYSO, and Terrance Gray, Director of ChiArts Strings (and Associate Conductor at CYSO) about the collaboration between the two orchestras, now in its third year. 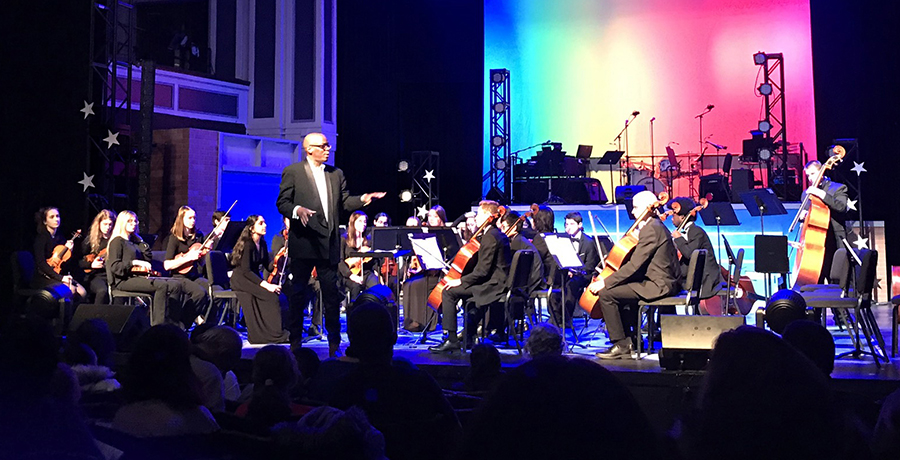 Mr. Gray speaks from the stage during the concert

Both Ms. Valdez and Mr. Gray agree that Accelerando Strings and ChiArts Strings are a perfect fit for each other and the ensembles each benefit from this collaboration. The main purpose of this partnership is for the students to enjoy making music together and learn from each other. Ms. Valdez said that the conductors “wanted to make sure that [they] were providing an educational impact and just not another concert to play.”

As a violinist of Accelerando Strings who got to experience this partnership last year as well, I feel that the collaboration was even more memorable this year. In the previous two years, the ensembles had only one short rehearsal together at ChiArts right before the concert. In contrast,  this year there was an additional full rehearsal a week prior to the concert that took place at the Fine Arts Building.

The extra rehearsal time gave CYSO the opportunity to welcome ChiArts musicians to our rehearsal space, as they have been welcoming us in the years before. Mr. Gray explained why an extra rehearsal was added this year: “Maestro Valdez and I thought the one rehearsal the day of the concert wasn’t really much of a collaboration. Making music together is clearly very important, but the young people having time to get to know each other is equally, if not more, important.” 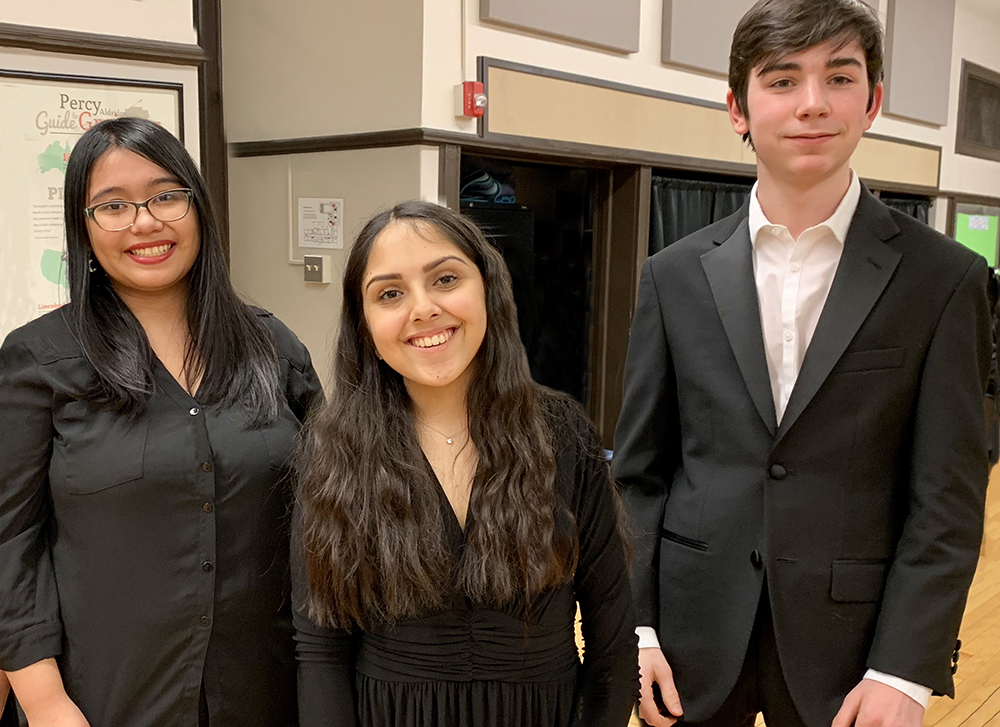 Members of ChiArts orchestra and Accelerando Strings (including Shreya herself, center) pose backstage

I think I can speak on behalf of both groups when I say that we learned so much from each other in this extra rehearsal. Our musical interpretation and attention to detail improved, and we also learned from the experience of playing under a different conductor. The common goal of both conductors was that they wanted to bring out the best in us so we could play as well to our full capability.

Making music together is clearly very important, but the young people having time to get to know each other is equally, if not more, important.

At the long rehearsal, we practiced each of our  two collaborative pieces, then split into groups of four and had meaningful discussions about our practice habits. It was really eye-opening to see that we all have similar struggles when it comes to practicing our instruments. Being high schoolers, it often gets hard to find a balance between our school work, extracurriculars, and music. It was comforting to talk to other people who value music as much as I do. I learned how my peers get over roadblocks when they are practicing and how they stay motivated.

Ms. Valdez said that she feels, “the best part of the collaboration is that students from all corners of the city and greater Chicago get to meet, play music together, and learn about each other.” In that rehearsal, we really did bond because of our enjoyment of music, and we learned that we all have a lot in common.

Students hanging out backstage before the concert

This year’s concert felt much more personal after having had a chance to get to know members of ChiArts orchestra beforehand. Instead of two groups of strangers playing together for one night, it felt more like young musicians joining each other to make music and do what we love the most. Mr. Gray believes that, “the best part of the collaboration is the possibility to bring young people together to share a beautiful experience. In the long run, this is what makes our world a better place.” Playing on the beautiful ChiArts stage, I could definitely feel all the positive energy around me as we were all pouring our hearts out and making music together. As Mr. Gray said, I agree that it’s this positive energy that makes the world a better place.

Both Accelerando Strings and ChiArts Strings are not large ensembles, so putting them together made us all feel like we were part of something greater. I felt like I was really part of a team with one common element that bonded us together: music.

It was really eye-opening to see that we all have similar struggles when it comes to practicing our instruments… [and] it was comforting to talk to other people who value music as much as I do. 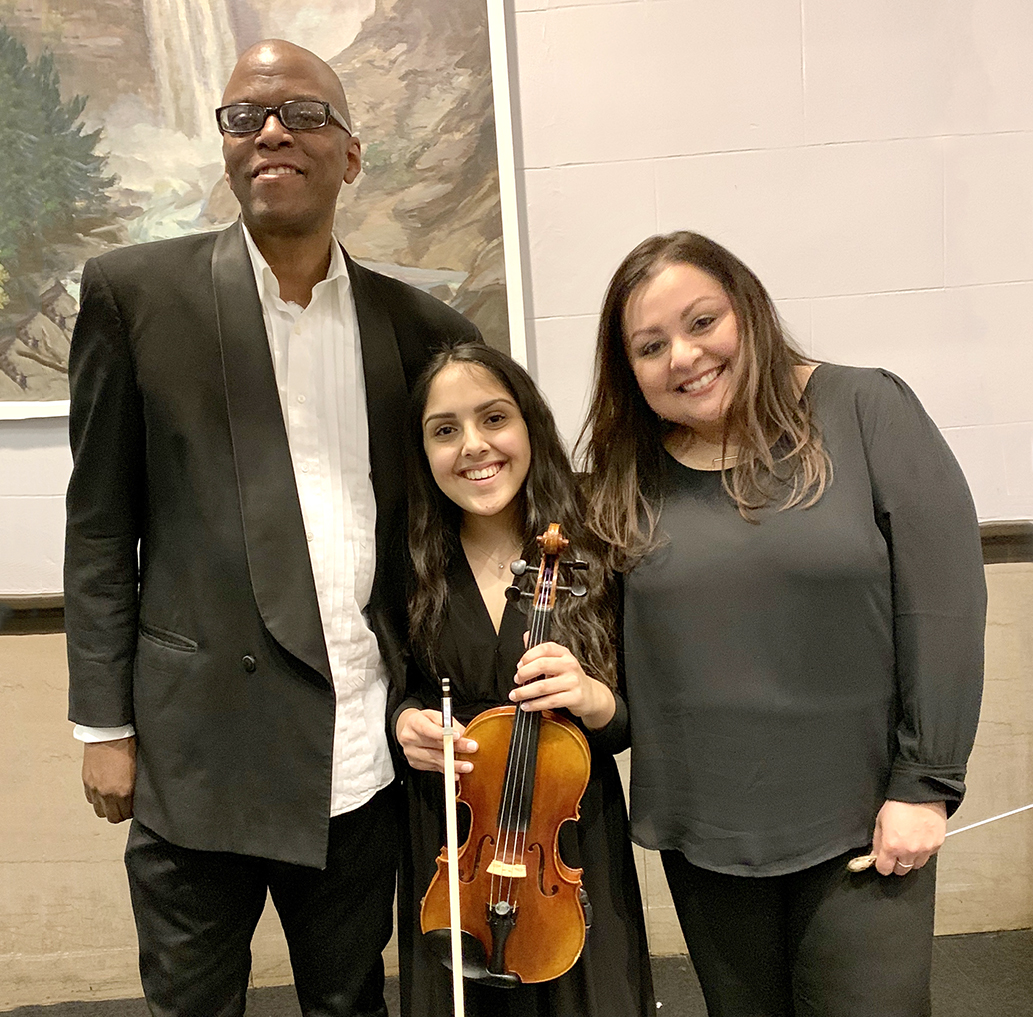 Shreya poses with Mr. Gray and Ms. Valdez after the performance

Jacob, a member of the ChiArts String Ensemble, said that he,  liked the big, beautiful sound that the two groups made together.”And as Ms. Valdez put it, “even though most of the students usually don’t verbally or emotionally express this, they do enjoy meeting other musicians, sharing the performance, and learning how music can be a bonding experience.” The CYSO and ChiArts collaboration was a great opportunity to share our love for music and learn from other young musicians.

Shreya Dudeja is concertmaster of CYSO’s Accelerando Strings and a member of the CYSO Social Media Team. This is Shreya’s second year in CYSO and she studies violin with David Dai. In addition to CYSO, Shreya is a member of her local youth orchestra as well—Naperville Youth Symphony Orchestra. Shreya is a sophomore at Metea Valley High School.