CYSO is off to Europe! Follow along as students from our Social Media Team share their experiences as part of CYSO’s 2022 Tour of Berlin, Leipzig, Prague, & Vienna. Up first, cellist Matthew Jordan shares what he’s excited to see, hear, and eat while exploring Europe.

“Where on earth is my rockstop?” This was me a few days ago, and it was the exact moment I realized that my packing skills were in need of some serious improvement. I have never been particularly good at packing. I don’t travel too often, and so the lack of practice may explain my ability to forget something as simple as socks. My ailment has been worsened by the COVID pandemic, with the last time I travelled internationally being in the summer of 2019 when
I strolled through the streets of Barcelona and got dizzy every time I stepped on a boat in Venice.

Three years later, I now have the opportunity to visit and perform in cities with an astonishing amount of musical history. In my aforementioned trip to Italy, I was fortunate enough to have been able to visit the church which Antonio Vivaldi attended as a child and hear a wonderful performance of his Four Seasons. Soon, I will be a part of something even more impressive: a ten day tour through some of the most culturally rich cities in Europe with performances in a few of the world’s finest concert halls. Ranging from Leipzig and its Gewandhaus where Felix Mendelssohn tenured as music director and conductor, to where Antonín Dvořák conducted the premier concert at the Rudolfinum in Prague, this trip is sure to be full of excitement, wonder, and a bit of anxiety.

It is my understanding that European audiences are very enthusiastic about hearing both their own music, as well as listening to Americans playing American music. If this is the case, then our repertoire should be as exciting to concertgoers as it is to us. From playing Gustav Mahler’s Titan Symphony No. 1 in his home country, to shouting “Yee-haw!” as loud as humanly possible during Aaron Copeland’s Hoedown, everyone involved should have something to look forward to.

Even more excited than the members of the orchestra are likely the shadow tour participants, which includes my parents. I asked them what they were most excited for and to no surprise they both said to listen to us play, but they also said they wanted to take some time and relax and immerse themselves in the culture. My father in particular said he was “dying” to see the Brandenburg Gate along with other historical monuments. I personally want to have authentic bratwurst and strudel as well as visit the Prague Castle.

I hope to make the most of this amazing opportunity, form friendships along the way, and create memories with the rest of this incredible orchestra alongside me. We will see you when we return! 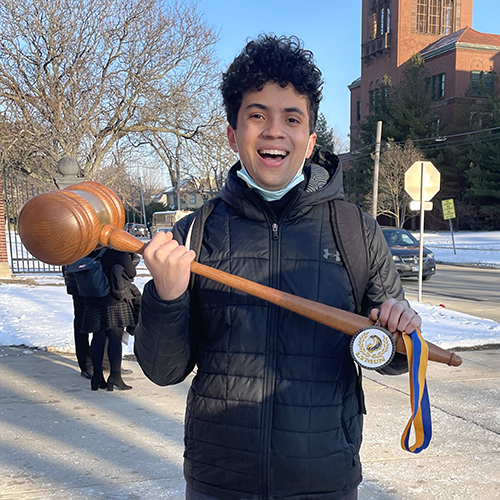 Matthew Jordan is a rising senior at Saint Ignatius and has been a part of the CYSO program for eight years. He also participates in CYSO’s Chamber Program, and performed in local public schools as a CYSO Ambassador in 2020. In his free time, Matthew enjoys playing basketball as well as spending time with friends and family.