As the pandemic left the majority of CYSO’s spaces empty in spring and summer 2021, we took the opportunity to do a little beautification. After many months of hard work, CYSO unveiled a new mural in the entryway of Suite 833 just in time for students to return to rehearsals this fall. The design celebrates the thousands of young musicians who have come through those doors over the course of CYSO’s 75 year history. 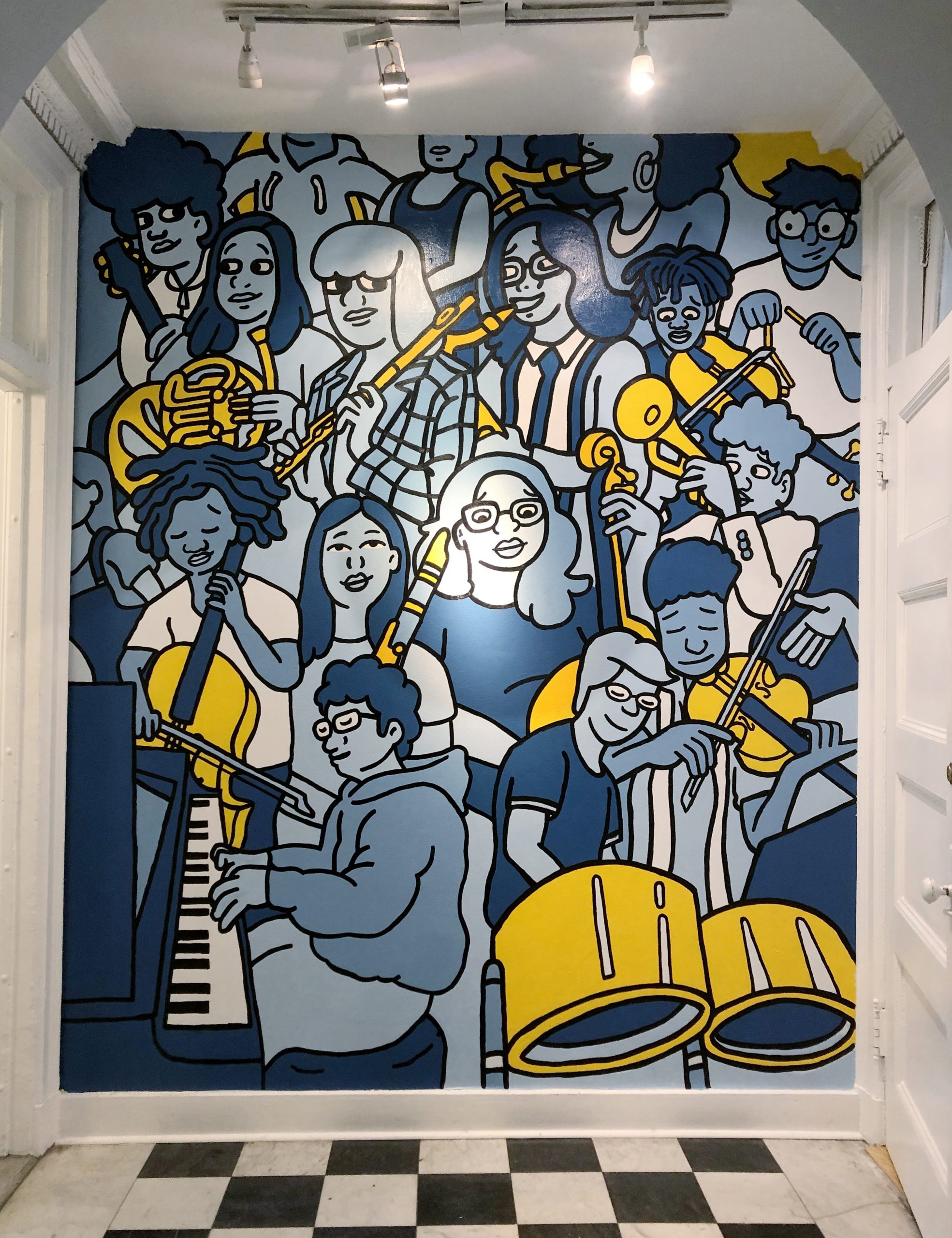 The mural was designed by Chicago artist Javier Suárez. CYSO staff were immediately drawn to the energy of Javier’s work,  much of which emphasizes community, pop culture, and the joy of life in Chicago. He was assisted in the creation and production of the mural by Chicago cartoonist Gabriel “Ferris” Ramirez. Photographer Chloe Wallace also helped during the early stages of the design’s development.

The mural is a bold statement that captures the energy and creativity of CYSO’s youth, nestled in the historic foundation of the Fine Arts Building. The design brings a colorful, vibrant aesthetic that greets students who rehearse every weekend in 833, as well as visitors to CYSO’s offices.

As with everything at CYSO, student participation was vital to the creation of the mural. During the planning process, students were invited to submit photos of themselves with their instruments. The team of artists combed through more than 150 submissions, using them as reference for the characters who made up the final design (look closely—maybe you’ll recognize someone you know!). We also offered opportunities for CYSO students to participate in the mural installation itself, a rare chance to get up close and personal to observe and learn professional artists at work. Students Alyssa Shih and Madelenne Arredondo attended install sessions over the summer, helping to prep the wall and sketch the design and paint portions as well. 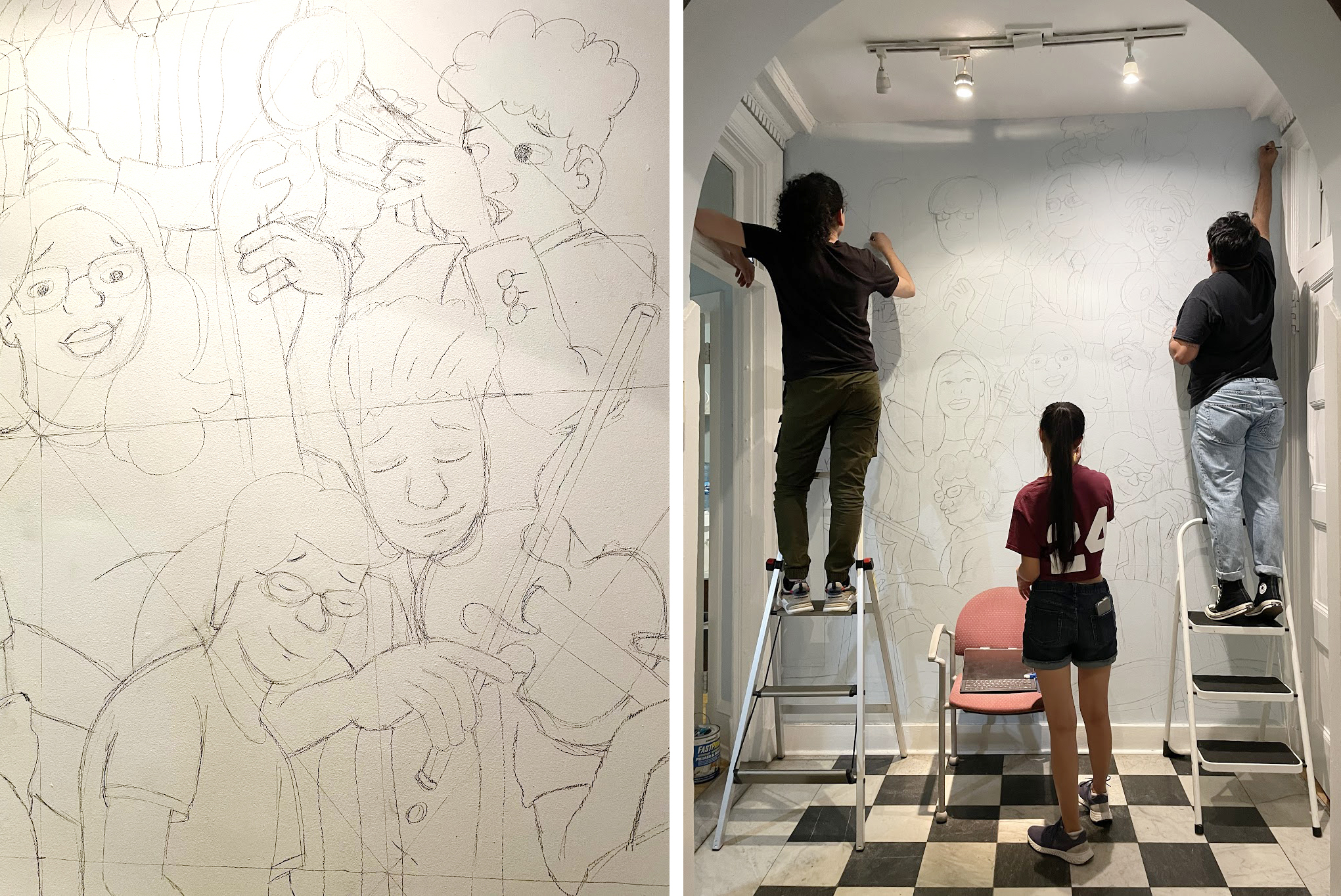 We spoke with artist Javier Suárez to learn more about his experience with the project.

What drew you to this project?

Javier Suárez: I was very excited and humbled to be asked to do a mural for CYSO in such a historic building. I went to college a few blocks away and spent many (frustrating) hours learning to draw in the hallways of that building. To come back years later and incorporate my art into the environment was an absolute privilege. Being able to create this mural alongside CYSO youth and younger career artists only made this more meaningful for me. I’m always trying to create opportunities for the younger artists around me to share knowledge and facilitate experiences that’ll lead to more.

What was the hardest and most fun part about developing the concept and creating the mural?

Like any of our projects, there’s always so much research that goes into conceptualizing what’ll become the final product. It was challenging to encapsulate the culture, diversity, and spirit of CYSO’s youth and talent into one mural. The pre-production phase was more ambitious than we anticipated because we received a lot more student submissions to be included as references. These challenges only made us more determined to create our best work and leave CYSO with something we can all be proud of.

What do you hope people who see the mural will take away from it?

I really hope students walk past this mural and see themselves. Not only as part of the CYSO family, but also as a part of a larger, loving community. Inclusivity is something that’s incredibly important to me. People like me who are part of marginalized communities are rarely featured in public art. Being able to create a piece of public art that includes diversity and representation of many of the communities I’m also a part of was an honor. I hope it inspires and empowers the next generation of artists.

Come visit CYSO’s new mural in the entryway to suite 833. And find out more about Javier’s work at the brand development agency he launched this year, hi-format.com.